A Taste of Ladakh 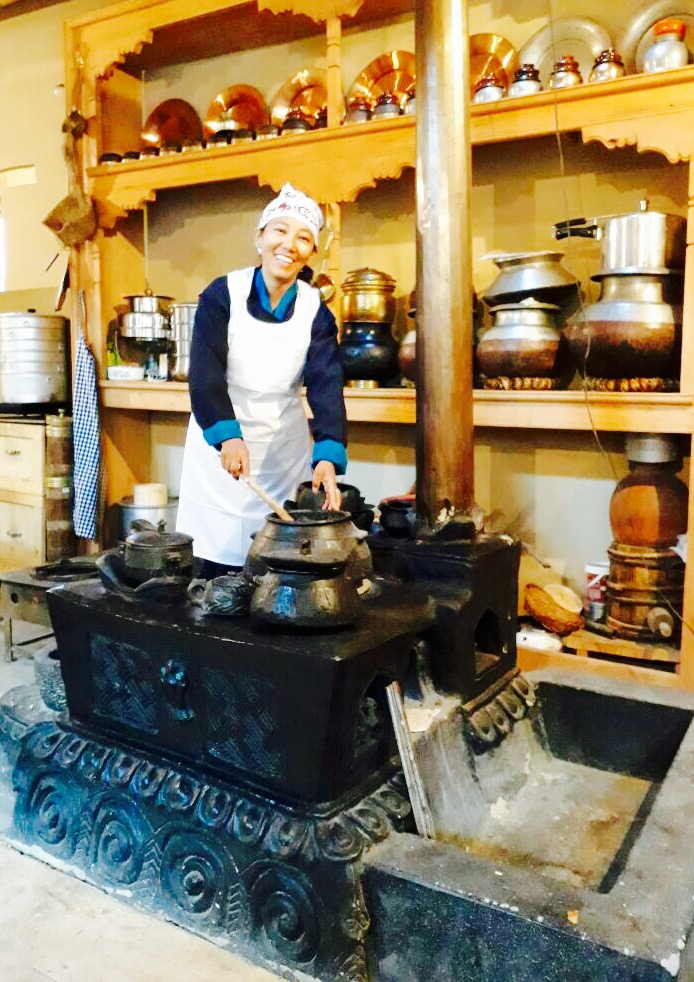 Ladakh, for most of us, represents largely remote and unapproachable terrain, not the least because of its oxygen-depleting altitudes. So, all those lovely picture postcard images of the stark mountains and landscapes, the white fleecy clouds in azure blue skies and the splendid technicolor hues of Ladakh’s geography remain etched in our memories to be unspooled until the next time we see those images or if we get lucky, to see the real picture. Little surprise, then, that the cuisine of Ladakh is also vastly unknown and unexplored in popular domain.

So when ITC Kakatiya comes up with a Ladakhi food festival curated by Capt Arjun Nair, ideator Discovering India and hosted by the very charming Chef Nilza Wangmo, who runs Alchi Kitchen in the temple town of Alchi (in Leh),  you say “Chang!”

“I first met Nilza in June this year at an entrepreneurship conclave in Ladakh, where I was also mentoring a few of the participants . Even though Nilza did not make it as a winner (the prized catch was working capital for one’s enterprise), I was quite impressed by her quiet confidence and pleasant, hospitable manners, ” shares Nair.

He paid a visit to Alchi Kitchen and was blown away by the simple, rustic and hardy food, which was also quite healthy. He got to know then that the restaurant remains closed and so do most business establishments h-in Ladakh from October until Marc-April when Ladakh remains largely cut off from the rest of the world. “I got in touch with the GMs of a couple of ITC properties and soon enough they were on board to showcase the rare cuisine of Ladakh,” adds Nair.

Chef Nilza gets us started sipping on some (yak) Butter Tea or ‘gur gur cha’ as the cute moniker in Ladakh goes. Buttery and salty, this tea made of yak or cow milk (depending on the region) and churned with butter, is sipped piping hot through the day, helping the residents with some calorific energy to cope with the rigours of the high altitudes. I also get to try a tiny bit of a pale pink colored yak cheese, which is of a consistency of slightly coarse ‘chhena’ or cottage cheese.

Up next on our plates are the Mokmoks, or steamed momos and we are served two versions, one with cheese and minced veggies, while the other has minced lamb and it is this, which is outstanding, despite having minimal seasonings and no spices. Having been cooked in its own stock and the meat texture just perfectly cooked, this one was a winner! 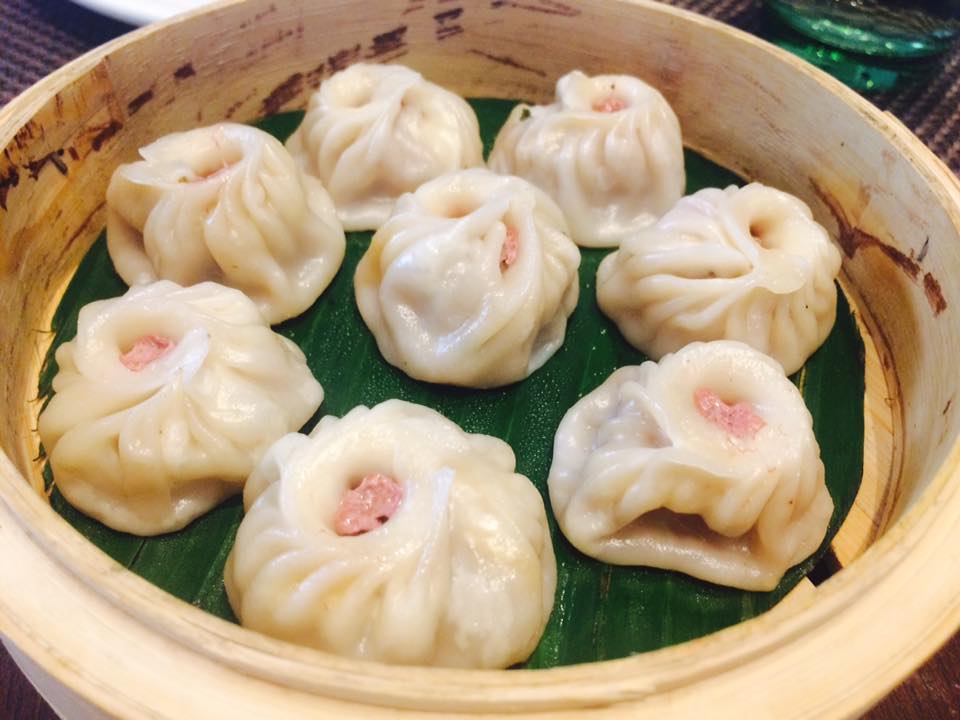 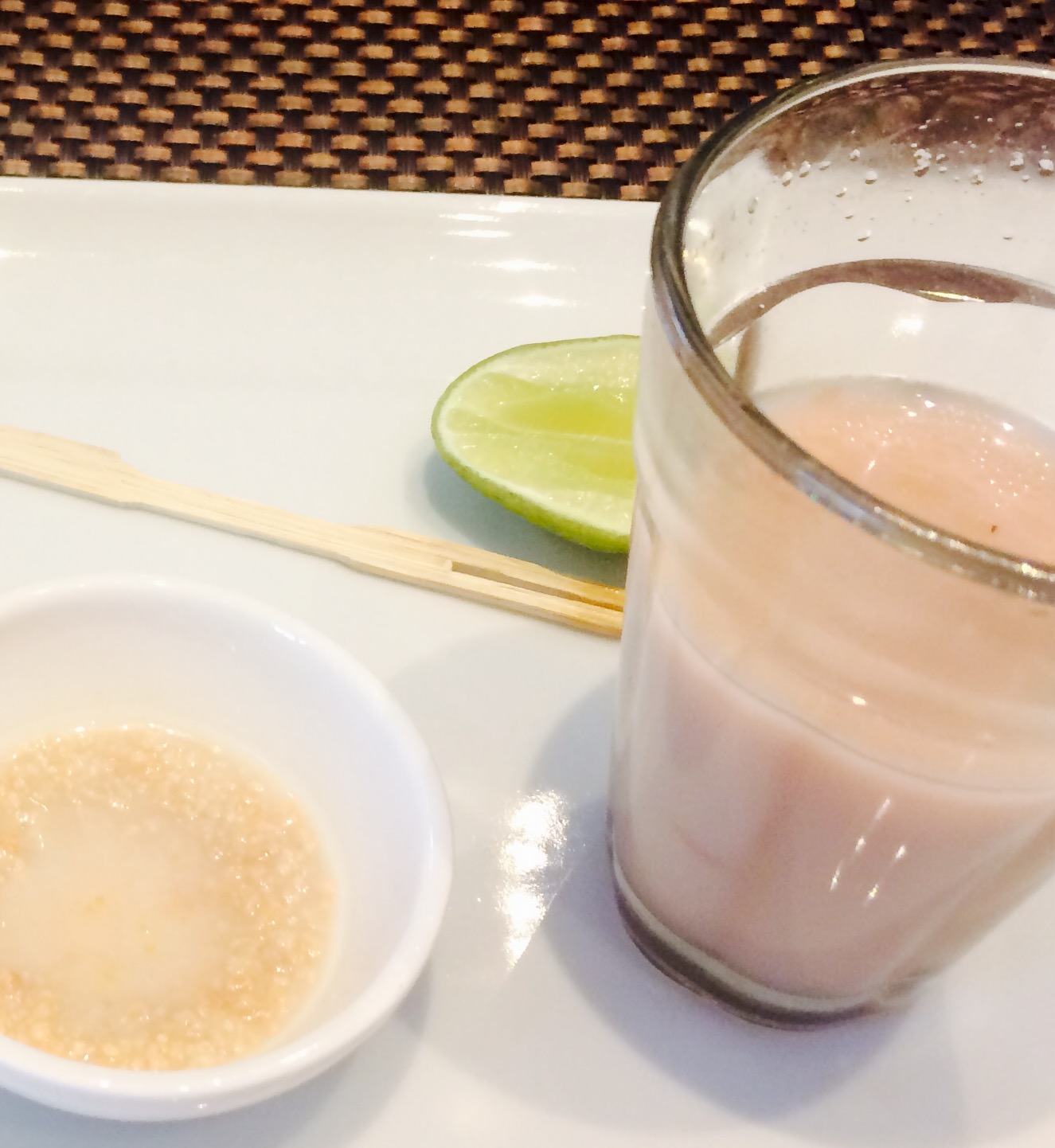 A delicious soup called Pakthuk follows, which closely resembles thupka, with wheat flour dumplings and simmered in a mutton stock and a skewered lemon as garnish to pep up the stuff. This is ‘slurpacious’ stuff, the kind which is comforting soul food at its best! Thupka and momos, a staple of Tibetan cuisine have been made popular by the Tibetan ‘dhabas’ and also the North eastern stalls at Dilli Haat in Delhi. Pakthuk, I thought, was a more evolved version of thupka, thanks to the hand-rolled wheat flour pasta in it. 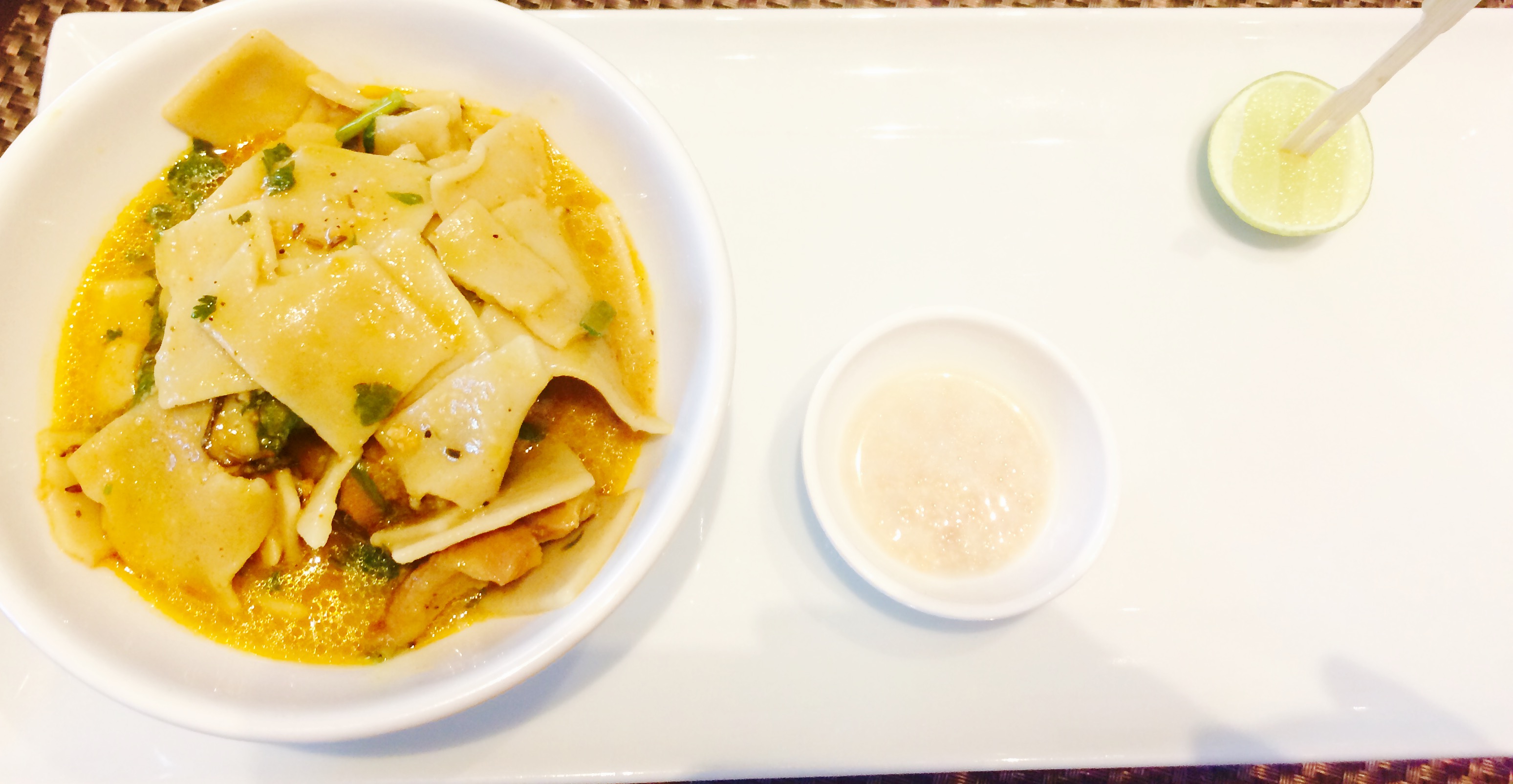 The delish Pakhthuk is made of wheat flour dumplings simmered in a light mutton broth..

While Ladakh doesnt have rice as its staple cereal, wheat and barley being the mainstay, ladakhi Pulao is quite popular at wedding feasts and formal dinners.  We are fortunate enough to sample Chef Nilza’s pulao that day along with two seemingly similar (but quite distinct, actually when you get to eat them), main courses. One is the Oskyu, which s more popular as a staple dish, cooked every day and consists of wheat flour pasta simmered in a gravy made of      there is both a vegetarian version to which milk is added, and a few vegetables of one’s choice such as potatoes, carrots and peas to make it creamily different and this is the one we were served, with potatoes and the wheat pasta, which was in one word, lip-smacking. The non veg version has meat added to it and is equally popular.

Chutagi was for me, however, the game-changer, especially the deep-flavoured gravy. The one served to us had boneless lamb, in a onion-ginger garlic-tomato gravy and loads of turmeric. The mustard oil used as cooking medium made it slightly reminiscent of the Eastern Indian way of cooking mutton/lamb (think a typical Bengali-Odia mutton curry), the only difference being this dish also had the now-familar pasta in it! 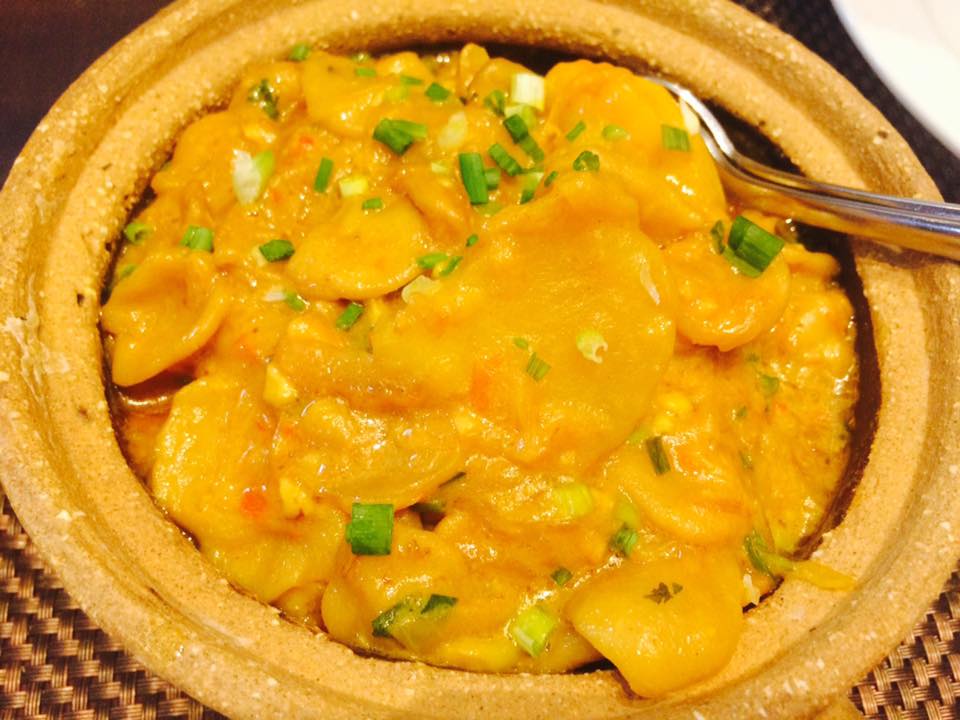 Oskyu is made up of wheat flour pasta, and is simmered in a tomato-onion-ginger garlic gravy 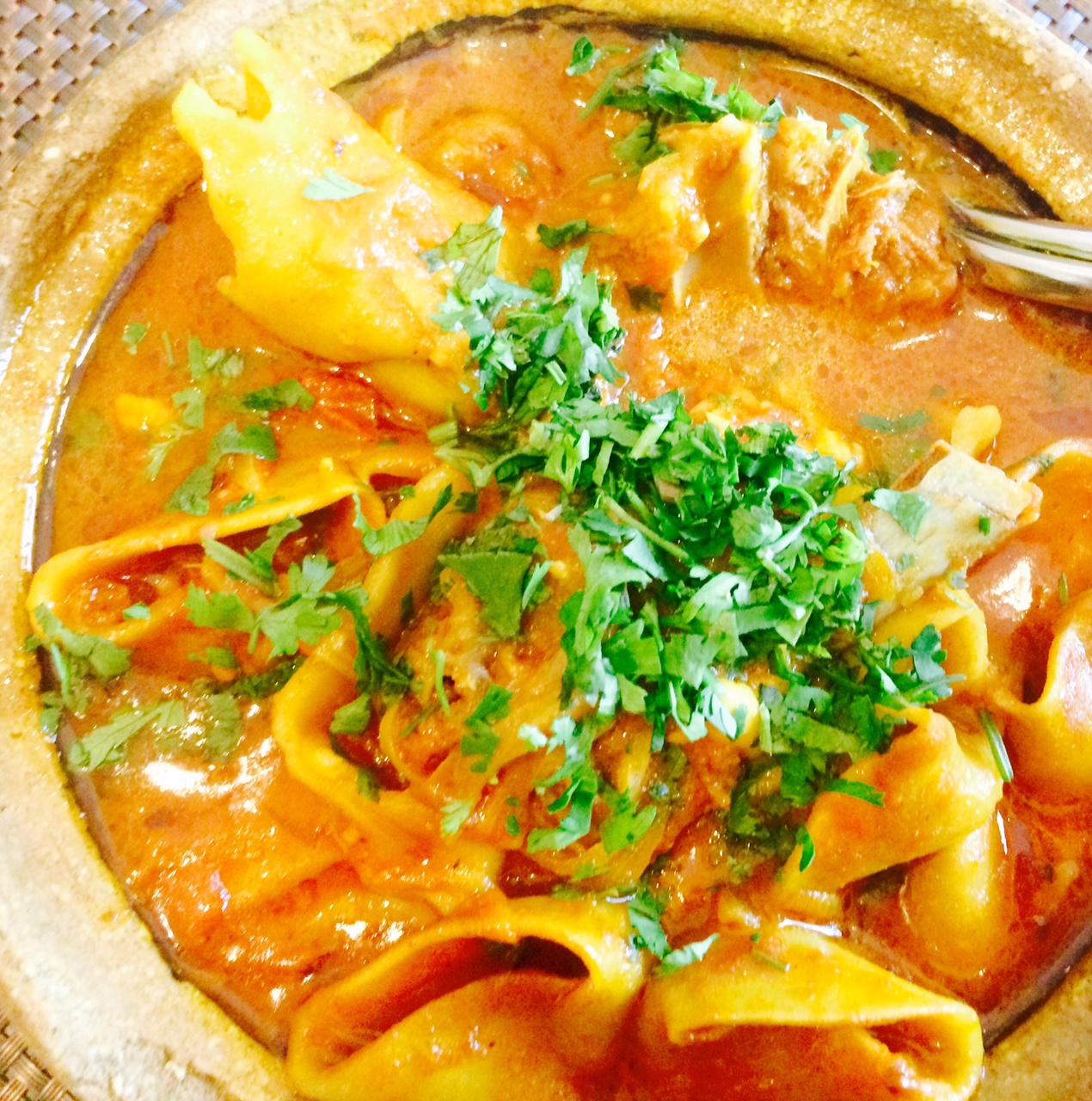 The festival travelled to Chennai and then Bengaluru, after Hyderabad and was well-received, says chef Nilza who was curating a Ladakhi festival for the first time outside Ladakh and on a national basis.

At Alchi Kitchen, chef Nilza uses traditional earthenware which is used for the slow cooking methods which define much of the Ladakhi cuisine. “For pre-order table bookings, we use the black pottery ware which enhances the cooking and a lot of expats come to the restaurant to get the authentic flavours of Ladakh,” she says.

In the pic below, we bring you all the three persons who gave us a bit of Ladakh in Hyderabad and who need to be applauded for their efforts! 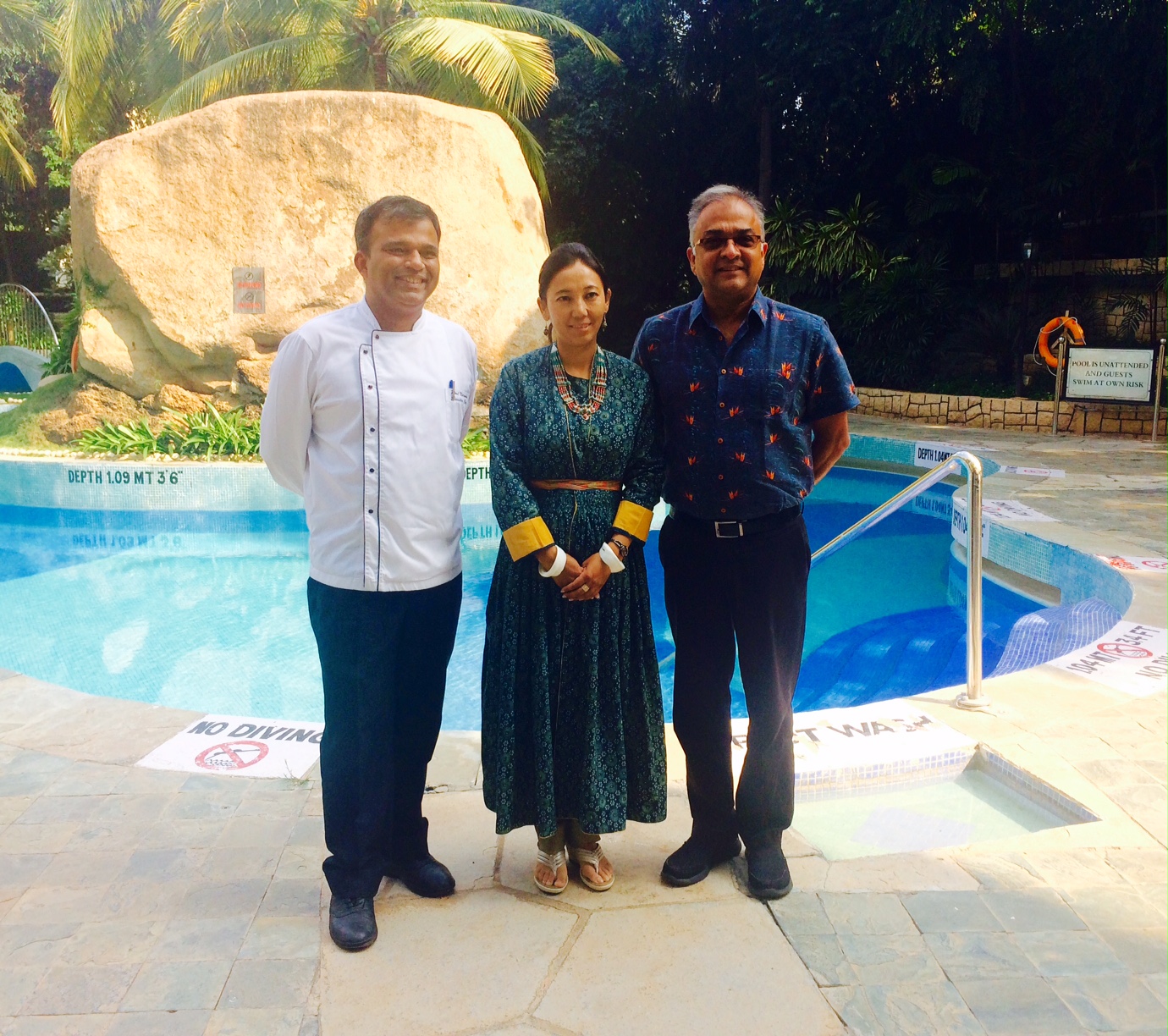