I spent the first five years of this new (and current) millennium at Ahmedabad in Gujarat. It took us (me & my husband) a while to get used to the sweet and spicy mostly-vegetarian cuisine, but when we did, we took to it like a fish to water. Simple, understated and yet bursting with flavours and textures is how I always regard Gujarati food.

So, when Rahul Korgaonkar, the F&B manager at Marriott Hyderabad once casually mentioned that his Gujarati mother in law was a fabulous cook, it was music to my ears, especially after having stayed away from Ahmedabad for more than a decade. Rahul had hinted that they might be roping her in the future for doing a home chef series, and true to his word and executive Chef Yogender Pal’s sense of initiative, there it was. An invite to a chef’s table at Momo Cafe, Courtyard Marriott with Gujarati home chef Nirupama Gandhi.

Turned out that Ms Gandhi, now a Bengaluru resident, is originally from Rajkot and comes from a family of bandhni saree makers. She loves cooking for her family and it showed in the way she received our group of bloggers, just like she would to her own home. “I was the youngest in our joint family and learnt most of my cooking from my mother and two sisters in law. We are Vaishnavs, so most of our food cooked is simple, without onion and garlic, and not with too much spices or oil,” says Ms Gandhi, while warmly welcoming to the very homely and inviting spread.

The first round that of starters or Farsaan as it is referred to in Gujarati had Khandvi, (for the uninitiated, these are steamed cylinder-shaped besan-and-yoghurt dumplings tossed with a nice seasoning of hing, rai, curry patta and lemon juice),  Patra (arbi or colocassia leaves smeared with gram flour or besan, ginger, green chillies and cumin) and last, but the best, Methi Ka Phool wada, my absolute favourite, crisp, slightly sweet set off by the subtle bitterness of methi or fenugreek leaves. Yummy! 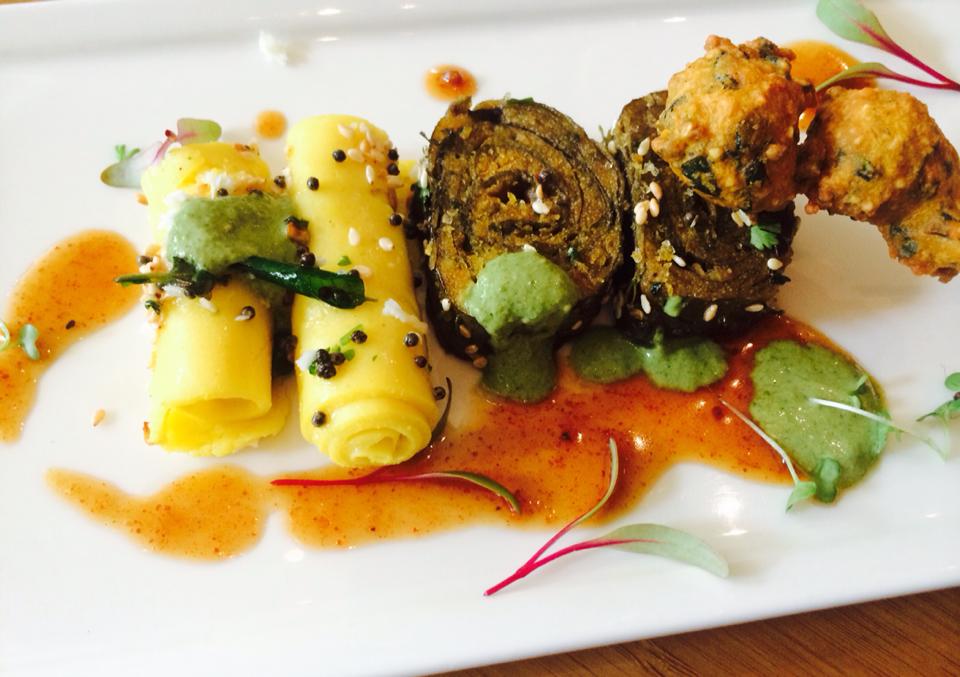 From Left to Right: Khandvi, Patra and Methi Phool wada

In most Gujarati households, meals are served on steel thalis with round katoris with rice, rotis\puris, bhakris forming the staple and dal, vegetable curries and chutneys-kadhi forming the sides. This was exactly the format here: We got hot puris with Undhiyu (an assorted vegetables favourite, more of a winter special), Bharwan Bhindi (green okra filled with a tangy masala and shallow fried), Aloo Rassewalle (boiled and mashed potatoes in a tomato gravy with minimal spices), Kadhi (slightly sweet), Dal Dhokli another of my favourites, basically gram flour dumplings (these can be of atta too) cooked in tuvar or red gram dal, tempered with a simple seasoning of  jeera and rai and garnished with coriander leaves. This was all teamed up with hot ghee rice,  light and non-greasy as well as small and hot rotis. 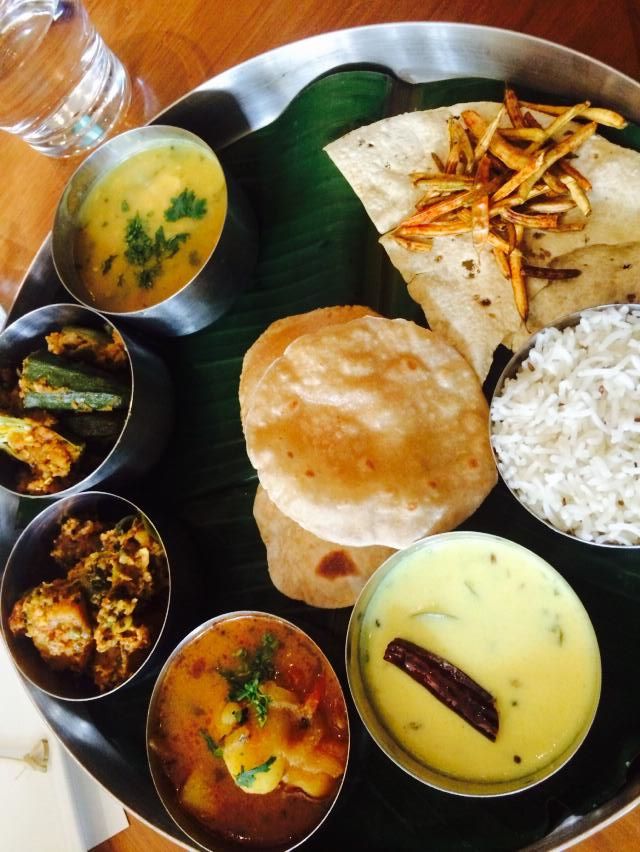 The Gujarati thali as described…

Ms Gandhi’s Undhiyu was surely the superstar of the meal. Packed with vegetables like yam, potato, sweet potato, eggplant and Surti papdi (green and tender haricot\kidney beans available usually in winter but grown off season too these days), along with Muthiya (steamed or deep fried gramflour dumplings with fenugreek and spices) cooked in a peanut & sesame seed paste, along with coconut and spices like jeera, dhania, ginger-garlic-green chilli paste.

Traditionally cooked underground in an earthen pot, placed upside down under the fire, Undhiyu is a signature dish for Gujaratis across districts.

Puri Undhiyu was the superstar of the meal!

Desserts time and it was a superbly-plated sheera, puran poli and shrikhand together… 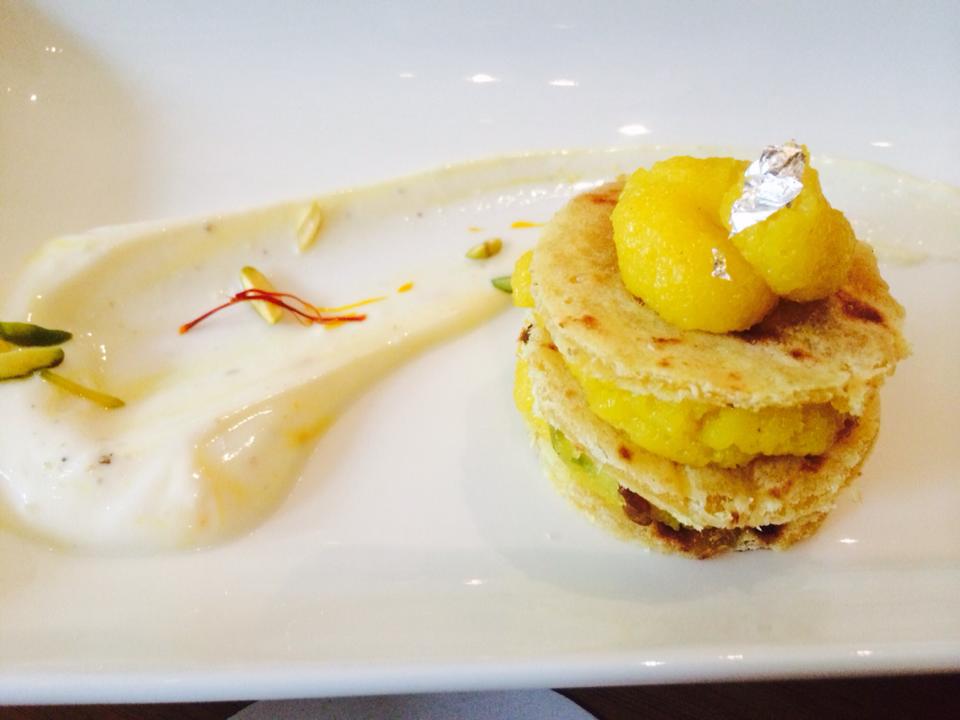 Desserts: Trio of Sheera, the yellow colored sooji halwa perched on a Puran Poli and brushed with Shrikhand

There was more to come: Masala (elaichi and other spices) chai in cutting glasses: A perfect ending to a homely, warm simple and yet absolutely fulfilling meal, the kind which fills you up with happiness and contentment.

A meal to remember and cherish….