While India is spoilt for wining and dining choices these days, its only a handful of F&B establishments, however, when it comes to a distinct and memorable dining experience. Farzi Cafe, which styles itself as a modern Indian bistro, is one such example. An unit of flagship hospitality brand Massive Restaurants Pvt Ltd, Farzi is promoted by restaurateur Zorawar Kalra (son of legendary chef Jiggs Kalra, who can be termed as India’s first celebrity chef and TV food show host)   Farzi dabbles in molecular gastronomy, and is on an experimental mode as well, tweaking classical, traditional Indian flavours to present them in a contemporary plating, the motto being, according to its founders, to create an illusion, with its cuisine.

Hyderabad got its own Farzi Cafe last November and has been making the right buzz since the last six months. Recently in April end, the Farzi menu saw a makeover, to which Eatopian Chronicles was invited for a special preview.

The menu sampling consisted of a huge repertoire, and since it will be tough to talk about all, let me stick to the more memorable ones. We started off with Tandoori Paneer Salad with corn nachos salsa, followed by Curd Rice Tikki Chaat, with DRagon Scoop and Besan Pearls for salads. while the paneer salad was nice, in a ho-hum way, it was the curd rice tikki chaat which was a lovely palate cleanser, so to speak with its refreshingly light and tangy flavours. The plating was even more delicious in earthen pots, with a lovely kiwi-pomegranate-edible flowers-sprouts garnish, this is exactly how it looked like… 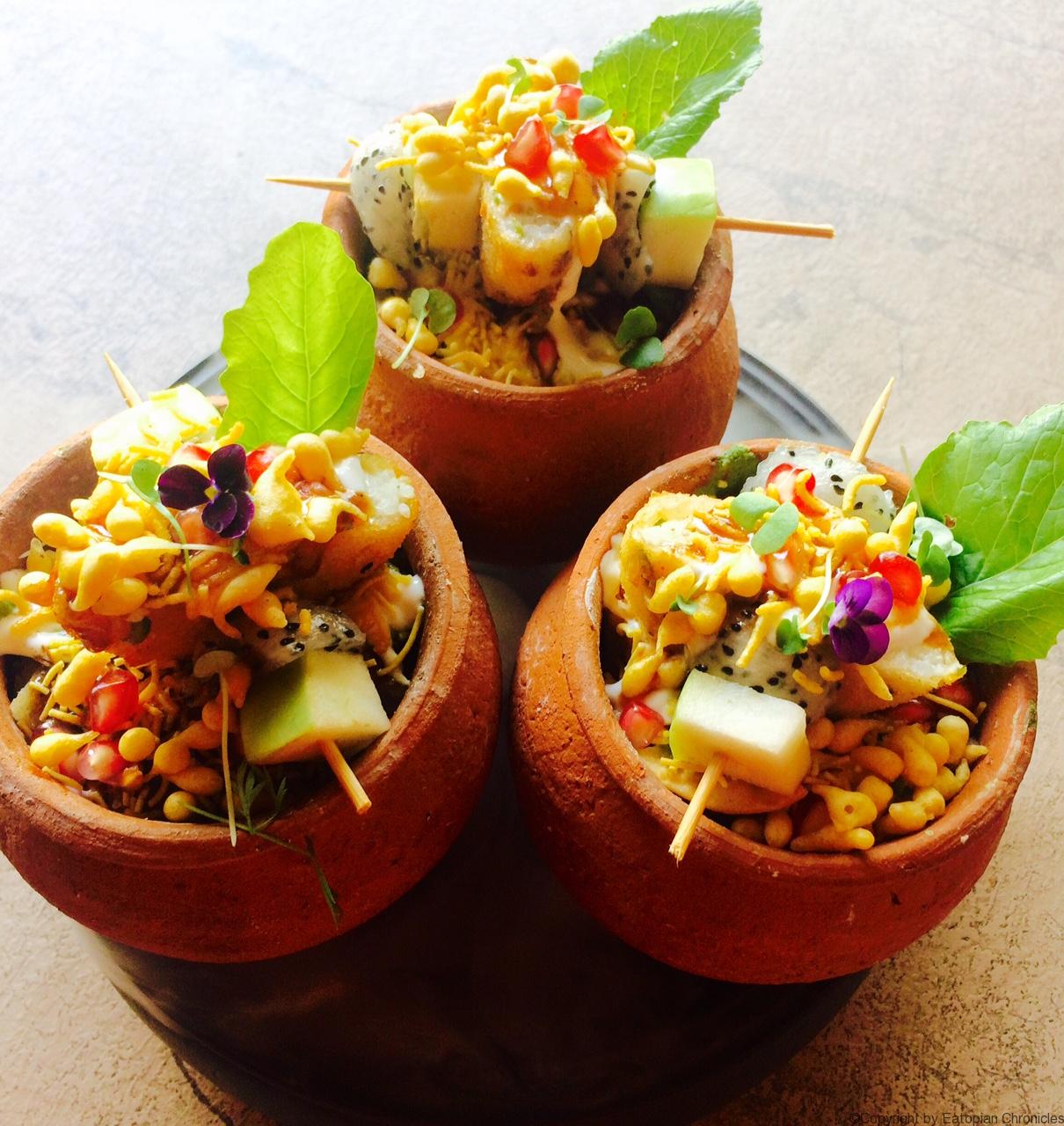 Appetisers, which go by the moniker of small plates at Farzi, followed in varied succession, so for vegetarians, there was Panch Phoran Paneer Bhurji Tart, with new pickle onion, Desi Curd Poppers, with smoked tomato chutney, and Mac and Cheese Pakora Bites, with hot garlic sauce. while the latter two stood up to its name, the panch phoron paneer bhurji tart was a letdown as there was barely any taste of the five-spice

The non vegetarian starters however sparkled in comparison, especially the Chilli Chicken patti Samosa, which was accompanied by an old Hyderabad-inspired Suleimani Chai chutney, and Sion Prawn Koliwada, with Anardaana Dust, Shrimp chips, The crisply fried prawns stood out for both for its distinct panko-fried super crispness outside, with the succulent prawn safely soft inside,  and also the spicy Koli spiciness.

But it was the Chilli Chicken Patti Samosa with Suleimani chai chutney which proved to be the conversation cruncher. The samosas were the thin and crisp “patti” types you get in Hyderabad and the chicken filling was the spicy stuff, more like Andhra chilli chicken..The chutney, furthermore was inspired by the Irani cafe styled Suleimani chai and the plating got ample brownie points for its creativity. This is how it looked like: 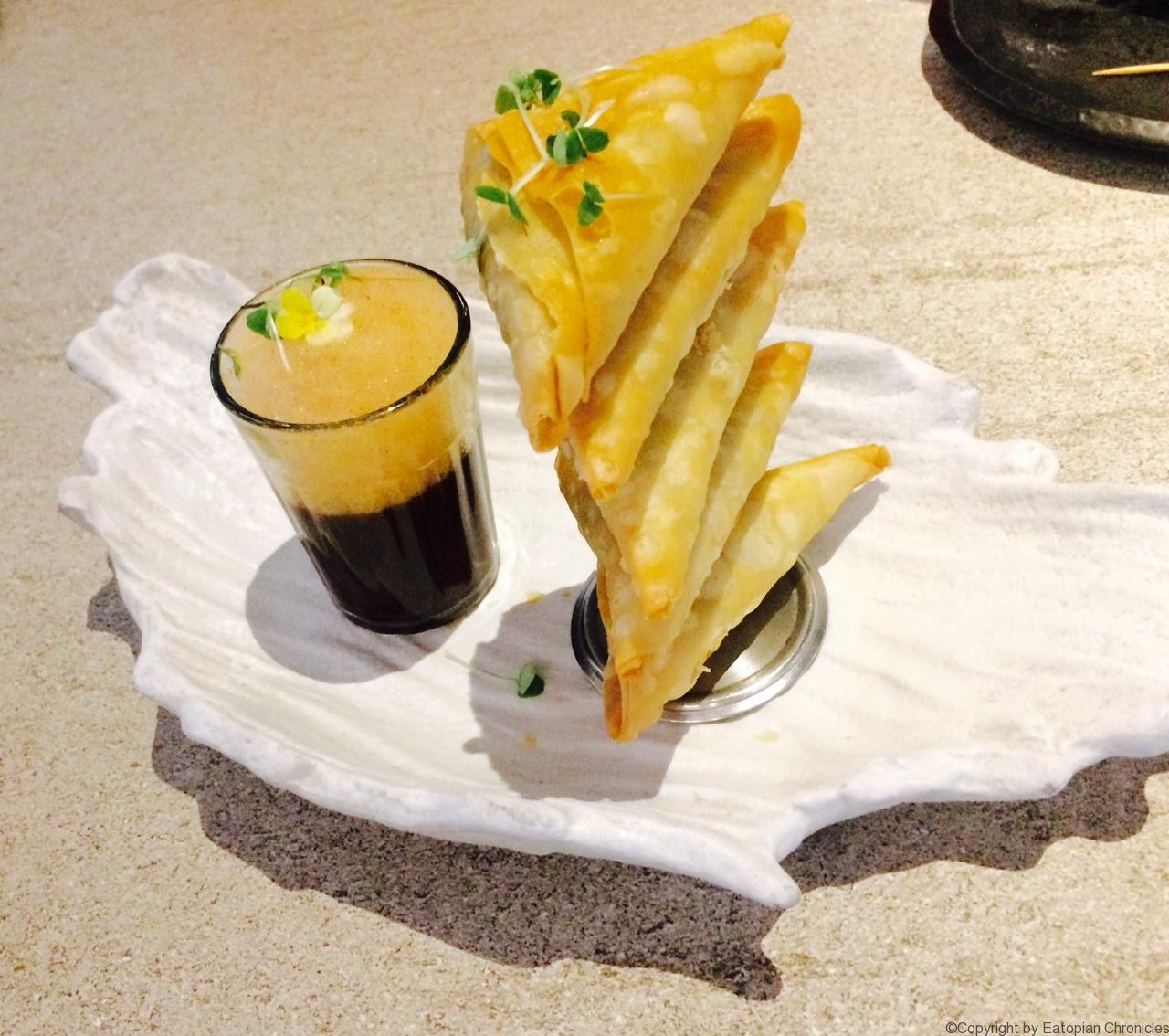 There was also old Delhi style mutton boti, served with mint pesto and Bhatti Ka Murg with Bhurani cream, all good stuff with the grilled meats.

Let me now talk of main courses, which were more benchmark stuff, an excellently done Spaghetti Aglio Aglio E Cocco with Tamatar Ka Kut, pasta blended in coconut milk and served with a tangy Hyderabadi-inspired tomato kut. What was even more outstanding was the Dal Khichdi Risotto, arborio rice cooked perfectly with whole green gram (sabut moong) and served with an Achaari butter and papad crisps. This was hot, soul food, immensely satisfying both on the palate and the tummy! Gets my vote, totally! 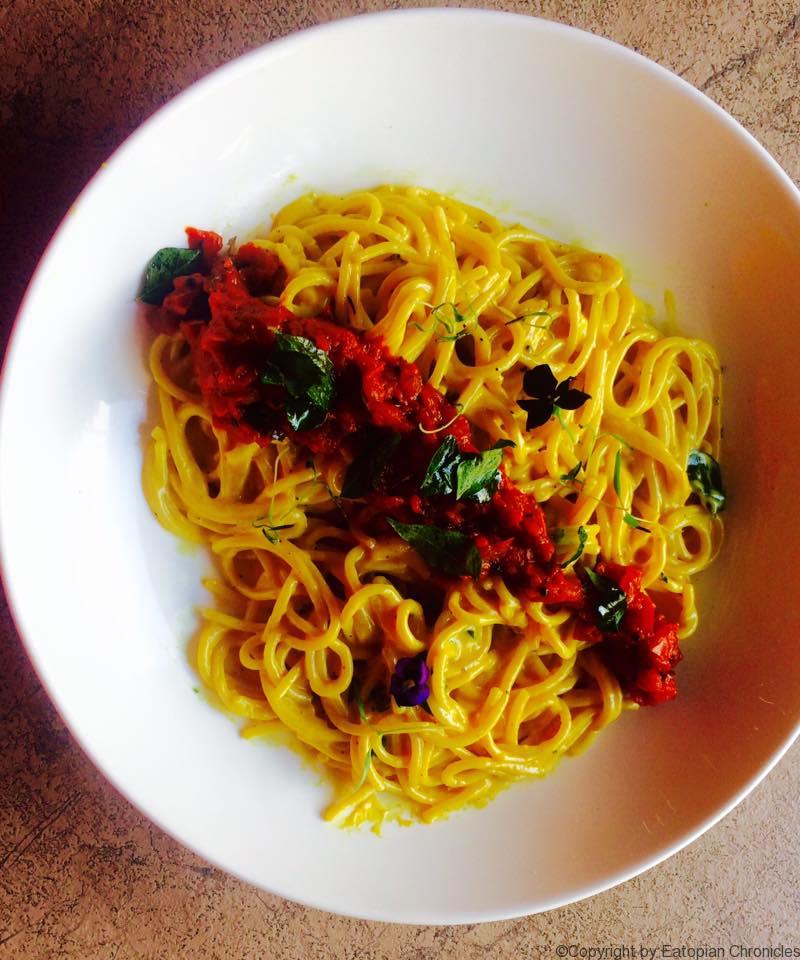 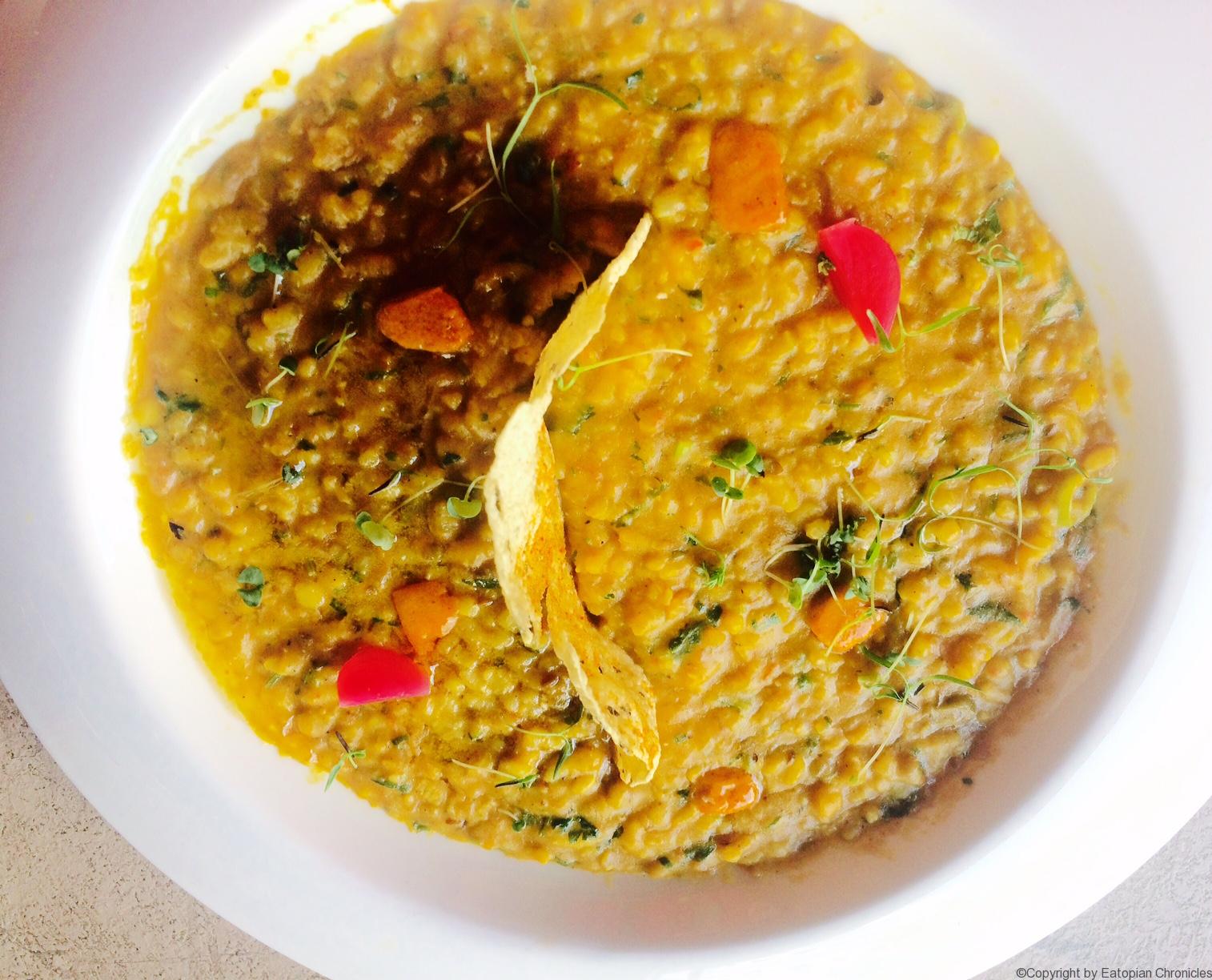 I also loved the Gundappa Donne Biryani (named after the famed cricketer Gundappa Vishwanath) which was plated slightly differently in that the chicken pieces were skewerd and served on the absolutely fragrant and delicious biryani. The Lemon Rice with prawns chettinadu was also brilliant, and so was the delightful-looking Bengali flavours inspired-Posto Fish with Onion Ghee Pulao and Mustard Broth, but my tummy was groaningly full by now, so kept both mentally aside for doing better justiice next time! 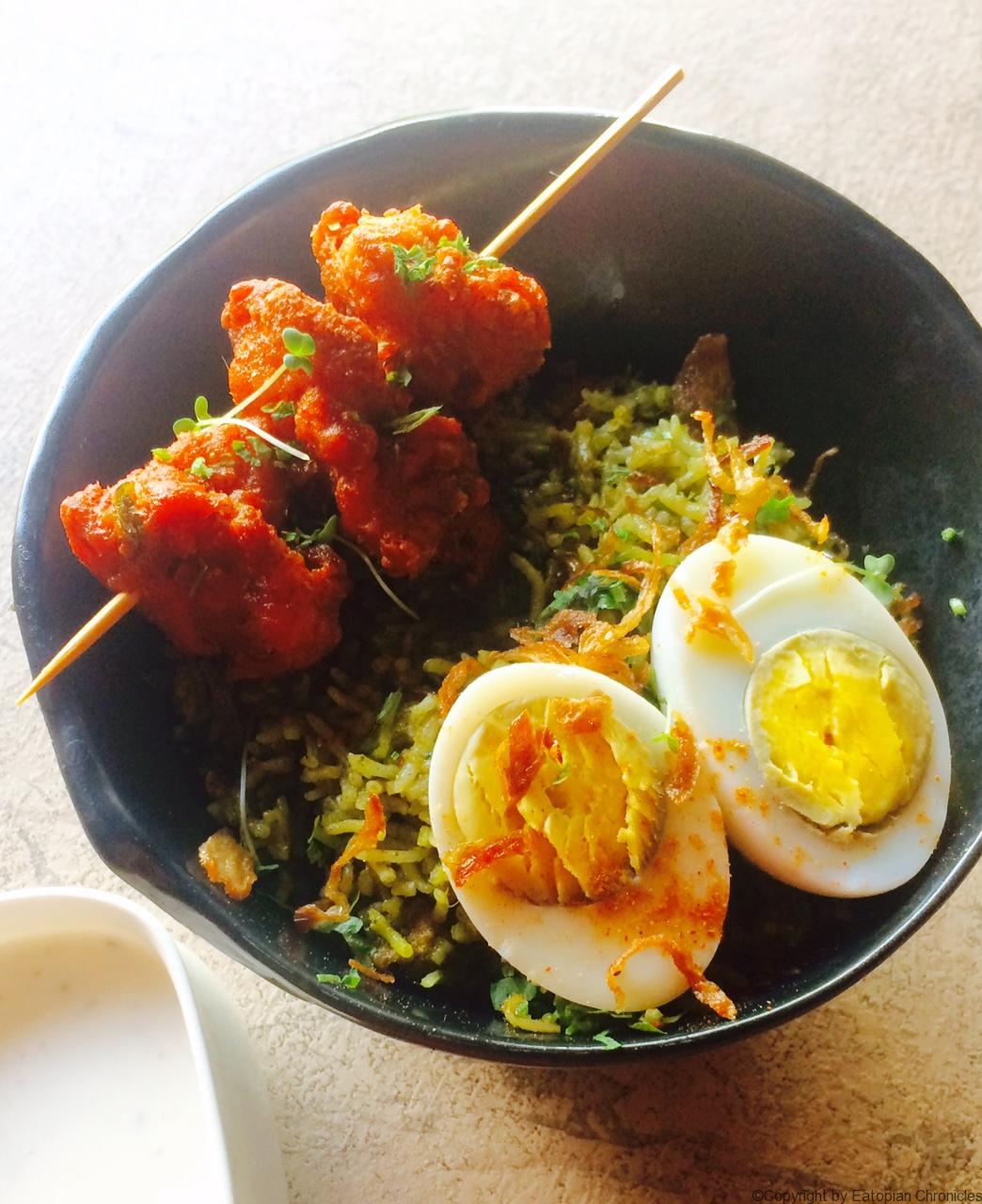 Desserts time and chef   did not disappoint with his trio offerings: Khubani and maple cake, Elaneer Panna Cotta, and Flourless Chocolate Cake..I have a weakness for Elaneer or tender coconut kheer so I loved that the most, especially in a wobbly panna cotta form but it was actually the Khubani and maple cake, which drew all the ooh’s and aah’s of appreciation. This was Khubani ka meetha (stewed apricot dessert which Hyderbad is famed for) adapted with a maple syrup over it and served with milk and saffron crisp and tutti fruitti ice cream, could it be anything but brilliant? 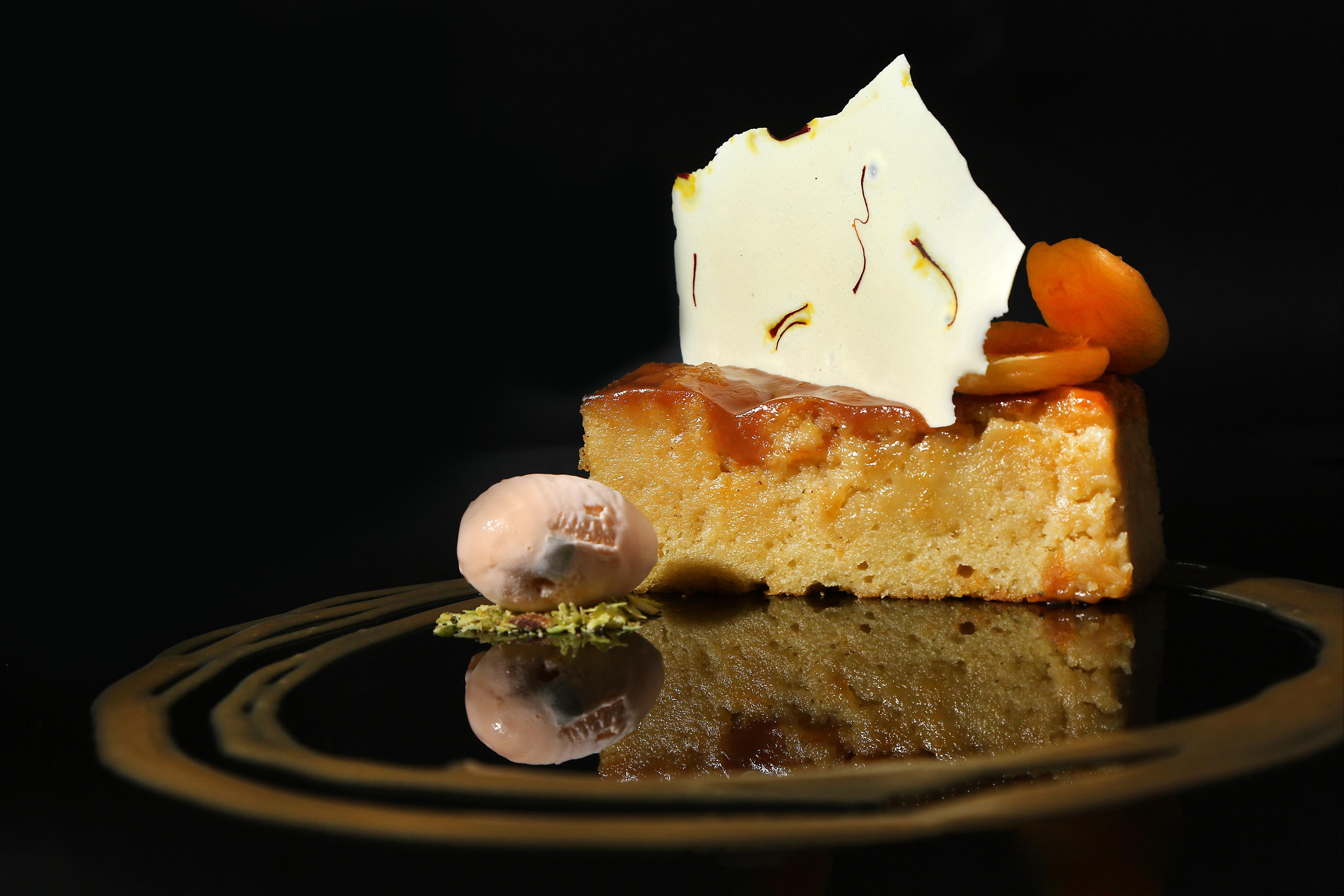 Khubani and Maple Cake was amazing!