Sri Lankan cuisine is quite popular for its aromatic and spice-laden avatar, and in South India it resonates in the cuisines from the five southern states, especially that of Tamil Nadu and Kerala. The liberal use of rice and ingredients like coconut, peppercorns, cinnamon, cardamom, jaggery and kodumpalli lends to it a similarity with south Indian food.

Unfortunately, despite the common aspects, you dont really get to savour food from the Spice Nation in most Indian cities including Hyderabad. So, when I landed an invite from ITC Kakatiya to be their guest at a Sri Lankan inspired food promotion as part of their Kitchens of India series, I was quite enthused.

What was more, it was to be curated by the charming Priya Bala, an ex-journalist colleague of mine from Bengaluru, who moved on eventually to being a food critic.

So, there I was, on a Friday evening feasting my eyes on the Sri Lankan spread laid out as part of the dinner buffet at Deccan Pavilion, the all-day dining at ITC Kakatiya.  Executive chef Paul Noronha joined us and got things cracking from the kitchen. 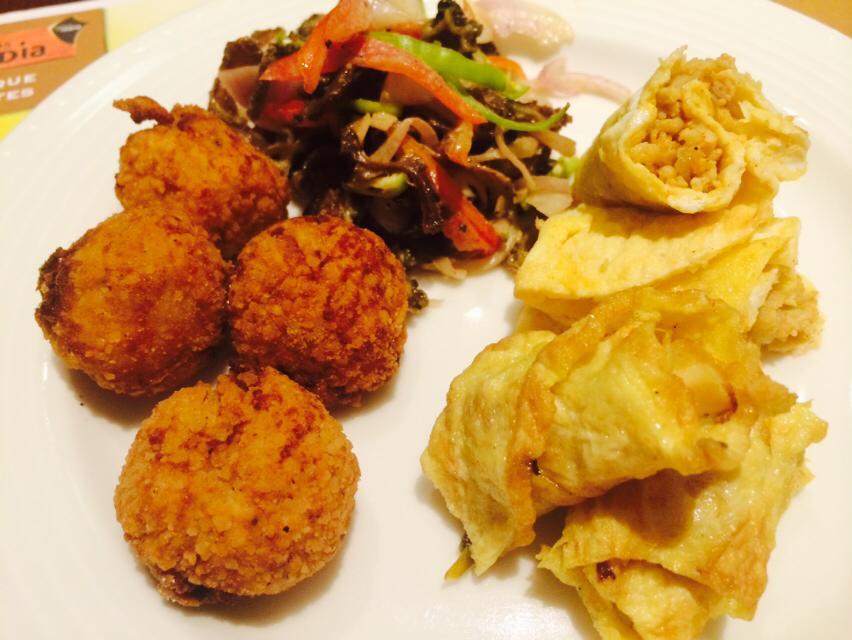 Some Sri Lankan Starters: In the background is the scrumptious Karela Sambol described below, in the foreground the cheese and vegetable croquettes on left and the crab omelettes on right

Priya explained that for food festivals like this one, she was drawing from food she had savoured as a child growing up in Sri Lanka, until their family moved to Madurai in the wake of the insurgency troubles which rocked the Island Nation in the eighties.

For starters, there was Bitter gourd or Karela Sambol, a fresh, crunchy salad made of thin slivers of  karela or bitter gourd, sauteed with salt and seasonings in a thick coconut milk (to reduce the bitterness) and tossed with freshly cut onion, tomato and green chillies with a squeeze of fresh lemon. Trust me, I have never sampled karela in a tastier version, ever. The second was a crab omelette, basically omelette filled with soft crab meat, simple and tasty. The third was a crumb-fried vegetable-and-cheese croquette, which could have been from anywhere, was not uncommon in any way.

Moving on to main courses, there was Idiyappam (rice string-hoppers, which is a staple of Sri Lankan food) Kothu, minced and griddle fried to resemble a finely minced vermicelli upma, with loads of beans, carrots and onions. There was also Manjal Soru, rice soaked in turmeric and coconut milk to give its yellow hue and creamy feel, and with a garnish of cloves, there wasnt a hint of any sweetness, though.

I teamed this up with some Kozhi Kurma, a chicken stew in a coconut milk gravy, with a nice ginger-pepper- aftertaste. This is usually had with appams, but there werent any on the menu that day.

While the chicken was mild, the Eraichi (mutton, also called so in Kerala) Curry was more robust and fragrant with spices or garam masala as we Indians say. 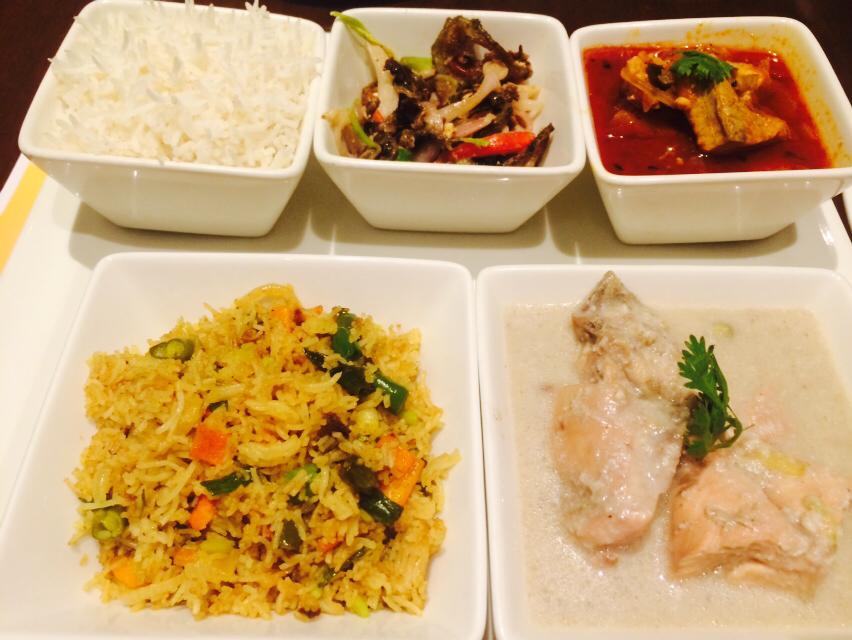 The whole hog: Idiyappam kothu with Kozhi Kurma, (the foreground) Eraichi Curry, third on the right in the background

The surprise soul food, however, was the Paruppu, whole moong dal (its traditionally masoor dal in S Lanka, so this was Priya’s innovation) simmered withcoconut milk and seasonings (salt, turmeric, garlic and green chillies) without any tadka. The taste of the yellow lentils was by far one of the most organic and delicious I have had.

Desserts time was even better. Styled elegantly by Chef Noronha, I got my due desserts on a platter, which looked like this: 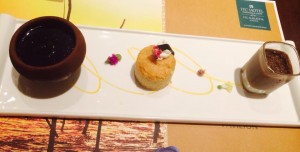 There was Kiri Pani in an earthen ‘kulhar’ which was basically curd topped with jaggery treacle (jaggery boiled down to a thin consistency), quite distinct in taste in a rustic and earthy way. Next up was the Dutch-inspired love cake, made of semolina, rose water and nutmeg, cinnamon and the rest of the cake-making ingredients like eggs, butter and sugar etc. The best of the lot however was this chocolate-hued Watalappam, a coconut custard pudding which gets its color from jaggery, usually the palm date jaggery or nolen gur, as its known and used widely in West Bengal and Odisha.

In the end, it was a memorable meal, smacking of different flavours and different influences by world cuisines.