Like it or hate it, but you just can’t ignore it. I am referring to Paradise biryani, arguably, the most saleable brand in the biryani-obsessed metro of Hyderabad. Opinion is sharply divided, sometimes accompanied by detractors’ derisive laughter, over the restaurant chain’s tag line: World’s best biryani in Hyderabad. However, the surge of humanity flocking through the day around the Irani chai-cum-bakery-cum restaurant and the circular-shaped biryani takeaway, forever pulsating with queues of biryani-obsessed citizens at the original multi-storied outlet in Secunderabad stands testimony to the brand’s presence in the DNA of the city of Nizams. Rarely goes a day in the virtual world where the merits or demerits of Paradise biryani are not discussed equally passionately on social media timelines in Hyderabad and beyond.

“Paradise biryani is a hugely successful brand and for visitors from outside, it continues to be THE biryani, says entrepreneur-cum-hobby chef Ravikanth Reddy, who also founded Foodies in Hyderabad Reloaded (FIHR), the most populous online foodies social media group in Hyderabad. “While local biryani connoisseurs might beg to differ, the fact is that they sell tonnes of biryani everyday and the name Paradise always pops up on biryani discussions worldwide,” , “Frankly, the taste is not the same as it was in the ’90s when I used to visit more often. Now its a more generic taste, thanks to so many outlets, ” adds Reddy.

Detractors aside, if the brand’s expansion plans are anything to go by, Paradise is on a roll. With 16 outlets in Hyderabad, (the latest being on the Shamshabad airport road), 6 outlets in Bengaluru, 4 in chennai, 2 in Vizag, it has also just launched  their 33rd outlet in Gurugram, making it the fourth outlet in the city.

To celebrate their Golden Spoon award 2018 for the most admired food service chain (casual dining) as well as being feted by Wall Street Journal, as being one of the best biryanis of Hyderabad, the management at Paradise had organised a special interaction table recently for food writers and bloggers at their IMAX outlet in NTR Gardens. 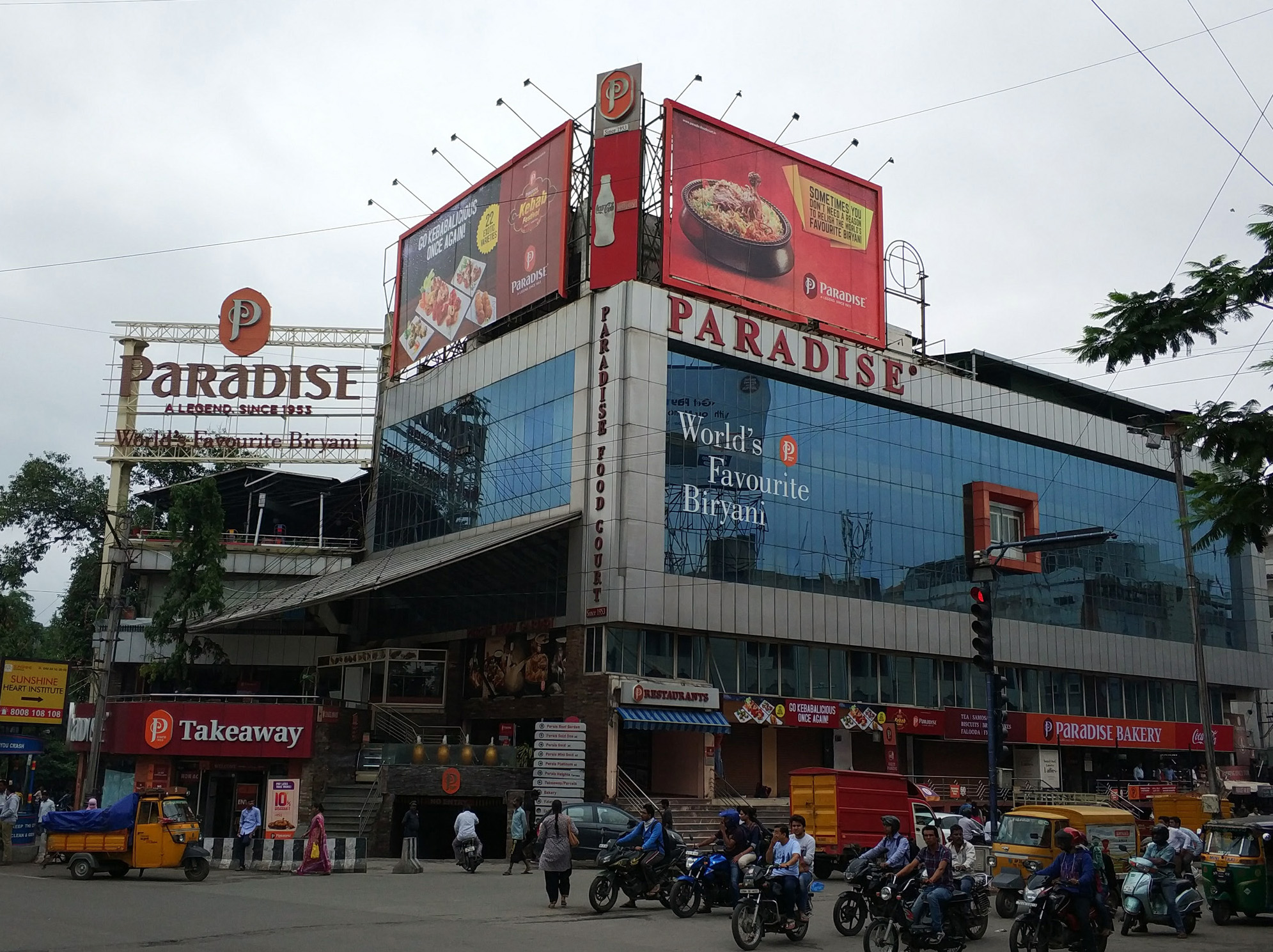 “We are doing very well in Chennai, and quite well in Bengaluru but yet to see that success in Gurugram, as the latter is not a rice-eating city. Our Shamshabad outlet is of course doing huge takeaway business and the location is helping, ” says chef Pankaj Kumar, newly appointed head of culinary operations, Hyderabad.

While we tried both mutton and chicken biryani, I preferred the taste of the latter and surprise, surprise was informed that the chicken version does more sales than mutton, in keeping with healthier modern eating habits). What was also interesting to note at the spread was the array of kebabs, which are the next most ordered dishes at Paradise after biryani, of course. “In fact, there is a 70-30 percent ratio of biryani to kebabs, when it comes to our daily sales,” adds Pankaj, who helmed a recent menu makeover of the bakery and is in the process of updating the main menu.

In kebabs we tried many, of which the most outstanding were the light and subtle Murgh Sarfiya Kalimiri, chicken tikkas in a yoghurt peppercorn, cardamom marinade. Also good were the Sabz aur Moong Phalli seekh, (peanut-coated vegetable sheekhs) which were crunchy and filling.

Chicken Sarfiya Kalimiri, chicken thighs in a marinade of crushed peppercorn, yoghurt and cardamom powder were subtle and flavorful.. 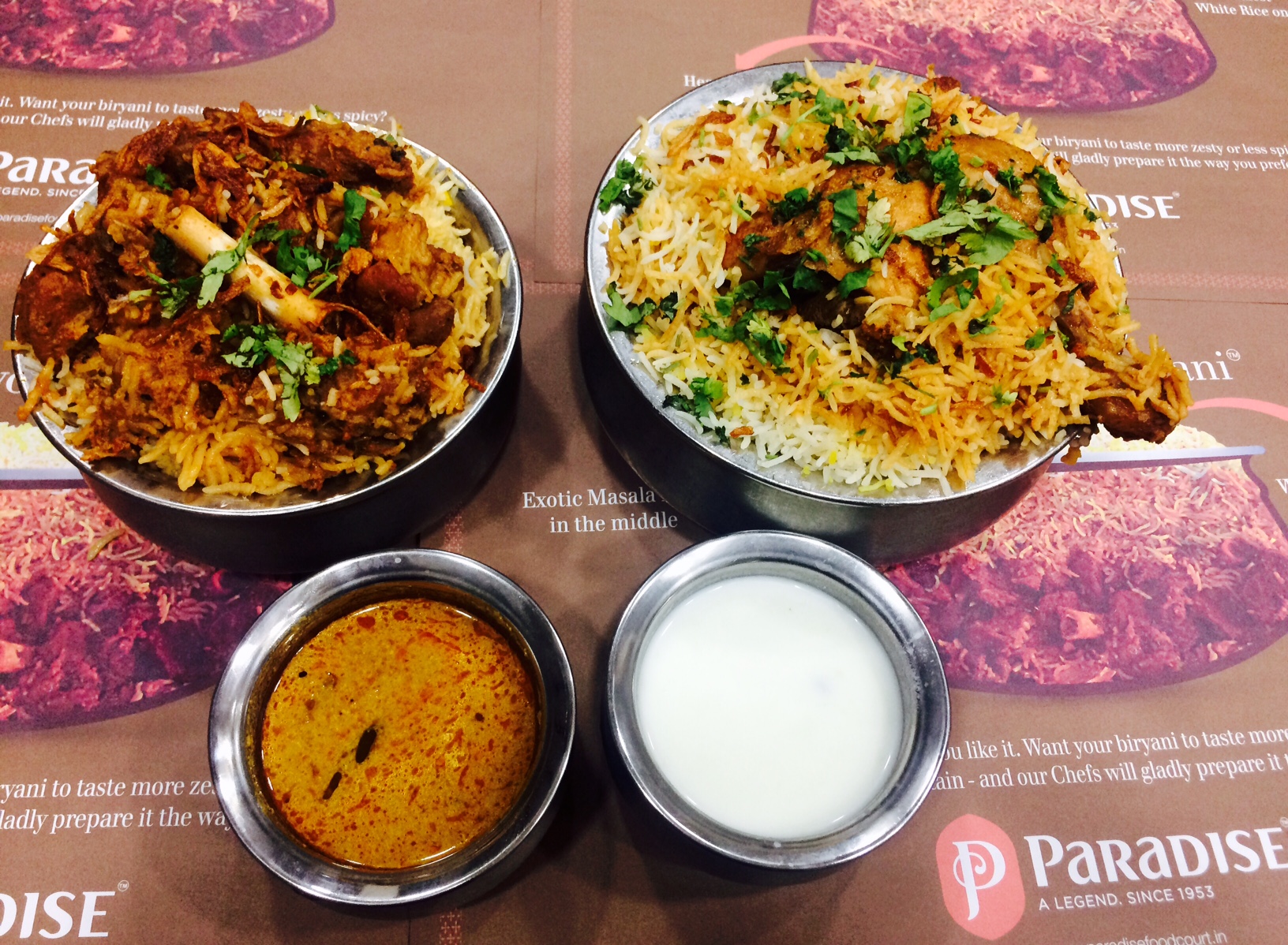 On the left is mutton biryani and on the right is chicken biryani which I found more flavourful, both to be had with mirchi ka salan and raita in bowls!

ith so many outlets, standardisation of cooking methods and ingredients is a must for validation of their biryani recipe USP, and so the sourcing of ingredients including rice and spices is from one common vendor pan-India.

Expansion plans are afoot, and chef Pankaj is not resting on his laurels yet. We have as many customers ordering Chinese and North Indian dishes, so a bit of a revamp of that menu is also on the anvil, he says.

We conclude with desserts, I try a spoonful of the Hyderabadi special Khoobani Ka Meetha with cream and it is indeed delicious. But I have a full glass of kulfi falooda, another of Paradise’s best sellers which often gets ignored in raging biryani debates.

On the walls at the IMAX outlet are many celebs’ pictures with their glowing remarks, among them being Sachin Tendulkar, Aamir Khan and Rajamouli (of Baahubali fame). Like we said in the beginning, there is no ignoring this one.. 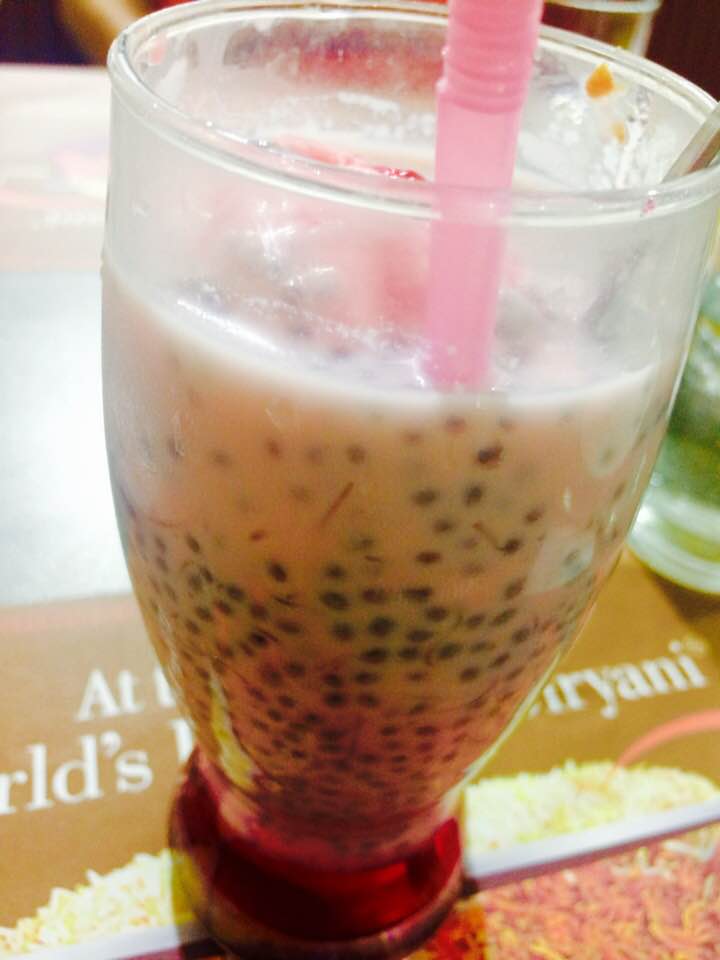 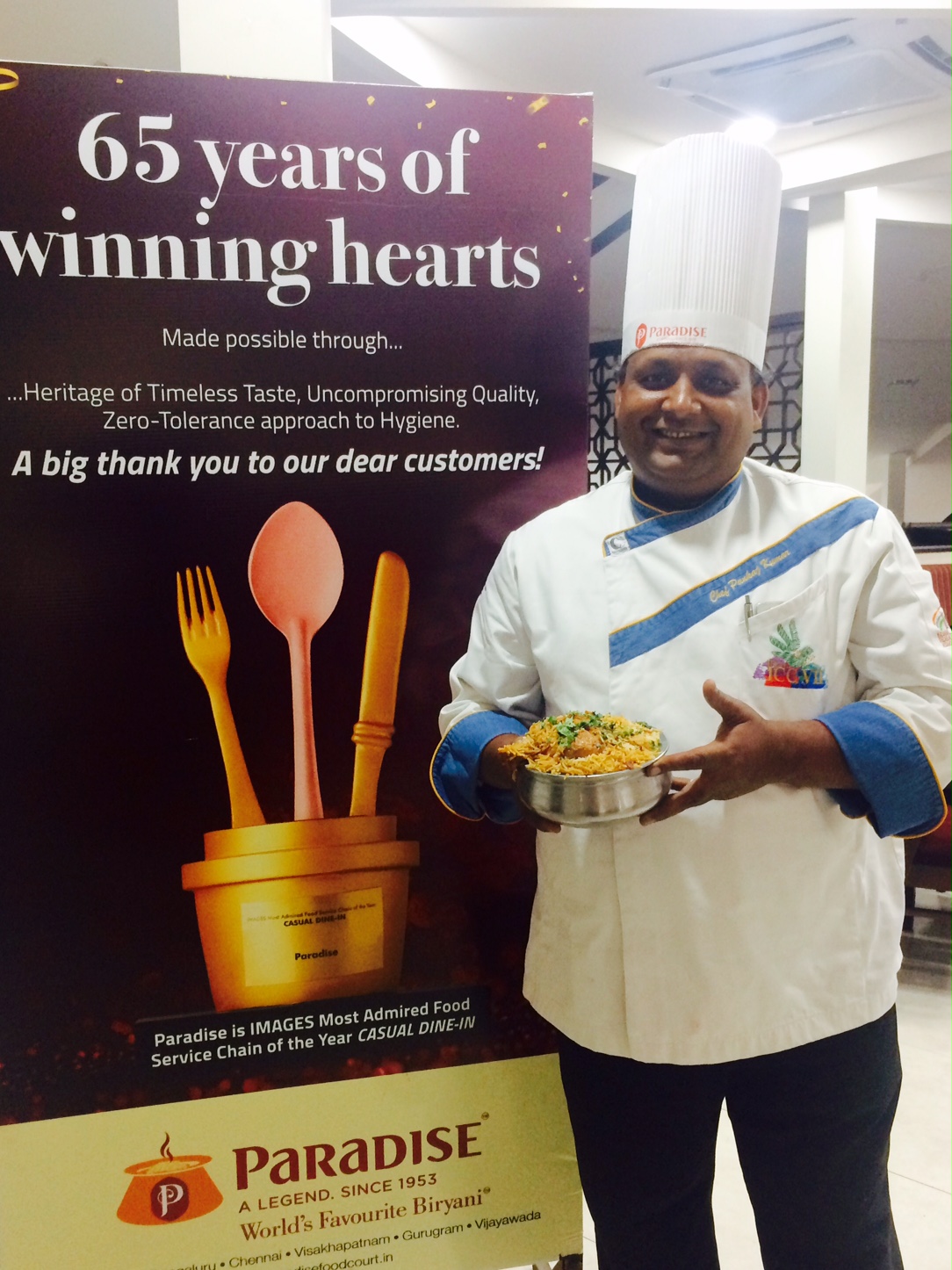