Tuscany, the Italian speciality restaurant at Trident Hyderabad, is one of those seriously elegant and yet warm, well-lit and cosy dining destinations in Hyderabad, which manage to cap your dining experience with an unique feel-good quotient.

An ongoing food promotion, titled Rome Meets Paris, showcased two of the most splendid global cuisines there recently. One cuisine, rustic, hearty, full-bodied.. the other, more classic & haute cuisine, a lot more refined, evolved & ooh la la! So, what really happens when the two meet on the menu? Not necessarily fusion, and not pitting one against the other. It was more like setting Italian , considered the mother of all Western cuisines, vis a vis French cuisine, more renowned globally for it’s finesse both in cooking techniques & ingredients. 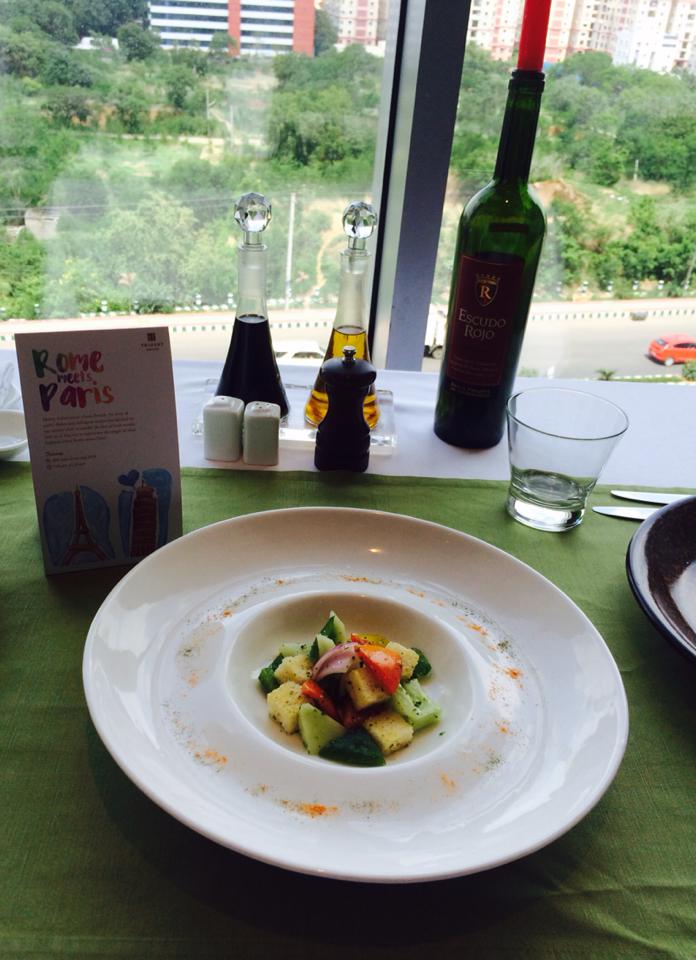 Tuscany, with its warm, well-lit interiors, has an excellent window view. Shown in the pic is Panzanella, a Tuscan style salad preparation of bread, tomatoes and peppers

This magic of two different cuisines was unravelled over some lovely Victorian white wine from Chinkara, one recent afternoon, which also happened to see the most perfect weather, when I was invited to lunch at Tuscany.

We started on Panzanella, a Tuscan style salad consisting of bread, tomatoes, onion, green & red peppers & cucumber in a basic lemon-olive oil-salt and pepper dressing. Simple, yet hearty and wholesome. Next up was Salad Nicoise, seared tuna and hard-boiled eggs with tomatoes, olives and anchovies in a vinaigrette dressing. 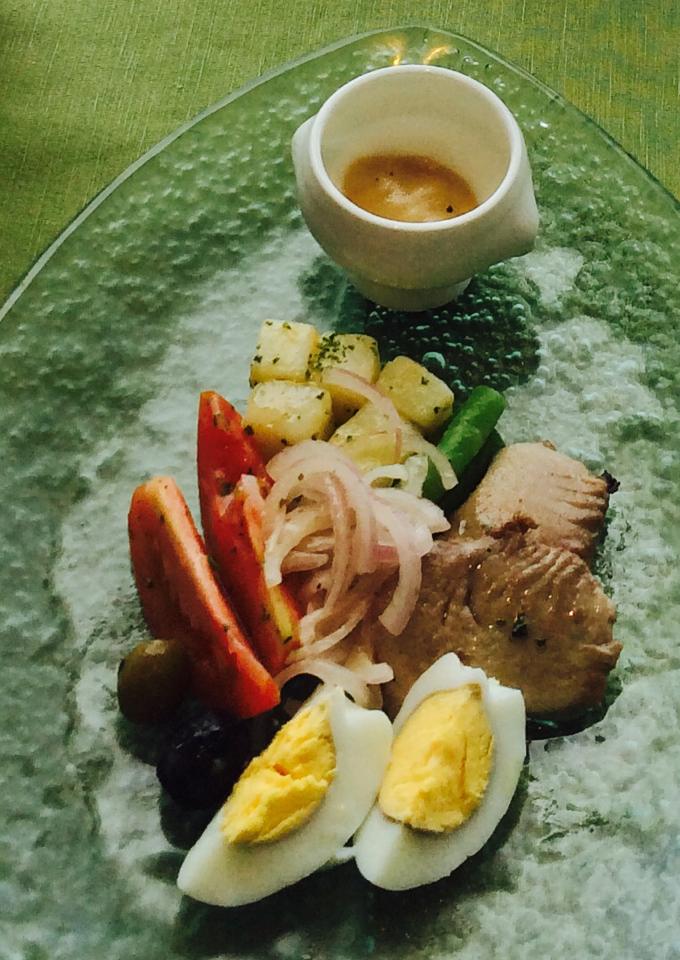 French onion soup was next and this used the classic recipe, that of veal stock and cheese croute. I have had French onion soup but not in a beef stock (as I dont eat beef), but I tried a tiny spoonful of the broth and it struck me as a bit vinegary, although the cheese croute was delicious.

For the Italian soup faceoff, we tried Ribollita instead, a Tuscan soup, a lot like minestrone with its tomato onion base, but without any macaroni. The traditional recipe uses leftover bread and poor man’s vegetables like carrot, cabbage, beans, chard and the word Ribollita means ‘reboiled’.

In main courses, we tried some Ratatouille, eggplant, zucchini, tomatoes and peppers, paired with some scrumptious garlic bread. I was impressed to know that the dish can be considered a part of both Italian and French cuisine, as some parts of both the countries such as Provencal in France and Sicily in Italy is considered to belong to the Mediterranean region. There was the gourmet French Coq a Vin, chicken braised with mushrooms, onions and red wine, as well as Lamb Navrin, again French, a lamb ragout with vegetables and served with herb rice. Since we had had enough of French, we decided to try some Spaghetti Carbonara, with cheese, bacon and black pepper, deliciously creamy and everything a good pasta ought to be! 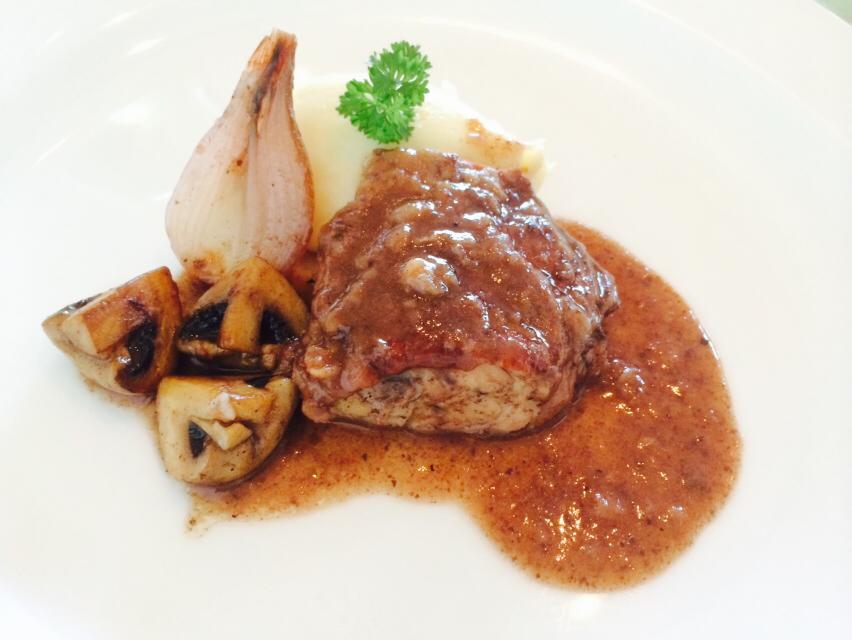 However, the best of this remarkable meal was for the last. Desserts time and I could gladly give a standing ovation to the marvellous Paris Brest, a classic French dessert made of choux pastry & a praline flavoured cream & exotic fruits. A bite of the crisp pastry, leading to the luscious cream within, topped with figs and green apple, and with the caramel sauce on the bottom of the plating completing an excellent dining experience. 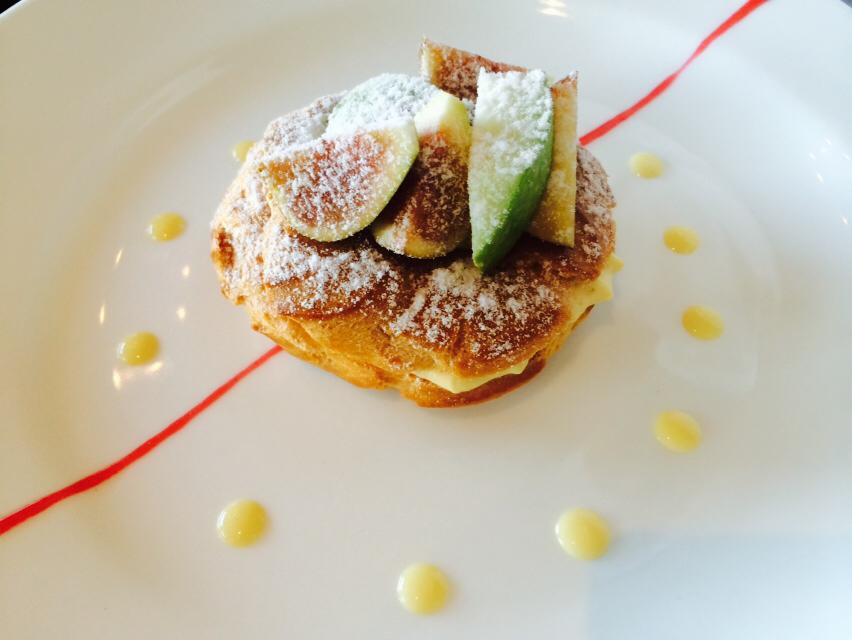 The Paris Brest, choux pastry with a most delectable caramel cream filling and topped with figs and apples..

In the end, it turned out to be a great way of getting acquainted with two of the most celebrated cuisines of the world. And one cannot thank the efforts of Manik Magotra, the executive chef of Trident Hyderabad, quite enough.