About a decade ago, I had the privilege of meeting a gifted and extremely humble human being, while working on a feature for a women’s magazine. Chef Chalapathi Rao, the then executive chef of ITC Kakatiya Hyderabad was in the news for having researched and curated the menu, as custodian of the brand Dakshin, of ITC Group of Hotels. I remember having enjoyed a top-grade South Indian meal, not the usual standard Appam-stew, Chicken chettinadu fare, but simple everyday home-grown-and-nurtured recipes culled from housewives and home chefs across hamlets and districts of rural/urban South India.

Cut to 2014. I get a call from Chef inviting me to Simply South, this new restaurant he had joined, not just as chef but also as a partner. As luck would have it, I was busy with a book deadline, and promised to come on a later day, but as sometimes things pan out, (such as a completely booked restaurant one Sunday afternoon), the day never arrived. Chef was also travelling to the Middle East (he is partnering a restaurant called Talwar there as well) and it just so happened that I had not visited Simply South, until it turned (or is turning) almost two recently.

Jagan Mohan, the very friendly owner of Simply South  whom I met at some other restaurant, invited me to a new menu trial and this time around, I had to break the jinx!

So, there I was, one afternoon at the cosy restaurant in Filmnagar and ready to attack! Along with chef and Jagan, was also present Amita Lulla, the petite and lively operations head, who happened to be chef’s colleague at ITC Kakatiya, where she worked on the sales team.

The exhaustive and aesthetically designed menu represents the best traditions of the five southern states of Andhra Pradesh, Telengana, Karnataka, Tamil Nadu and Kerala, besides a smattering of Hyderabadi. Challu (as he is known affectionately in F&B circles), at his hospitable best, had personally chosen a menu for us and went right across to the kitchen to get the good stuff out. We started with Tala Hua Gosht, a Hyderabadi special, more specifically from the Old City or “bylanes of Charminar” as the menu mentions, and Meen Karwari, a Kannada speciality of fish fingers marinaded in a masala and rawa or semolina-crumb fried. 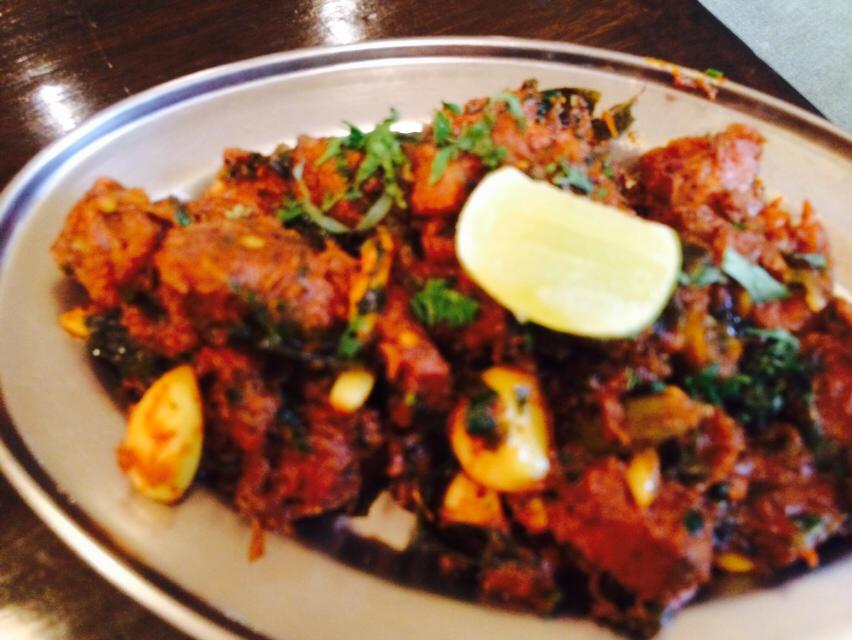 The boneless mutton fry was the best I have had, dry and with the right spice quotient. The Karwari fish fry was good too, but since it was murrel fish and not the usual Bombay duck or bombil fish, the version used in coastal seafood restaurants in Mumbai like Gajalee, Trishala and Mahesh Lunch Home, as chef quickly pointed out, the taste was not quite superlative.

For main courses, there was the Andhra special Kothmiri Kodi, a subtle yet superbly done chicken gravy of coriander leaves, green chillies and spices, the kind which you cant just stop eating! There was the tangy Ambada (or gongura as its also known) Keema, Anumulu Koora, again an Andhra vegetarian special, made of butter beans, potatoes and green brinjals, soothing to the palate and quite filling too. While we had all this with Veechu Parotta (a layered maida paratha much like the Malabar parotta), we finally teamed Alleppey Prawns curry with Appam. 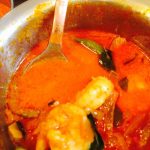 The robust and tangy Allepey prawns curry from Kerala 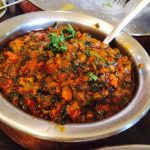 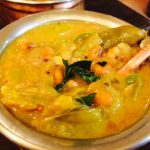 An Andhra special of butter beans, potato and green brinjals

For desserts, there was the divine and creamy Elaneer Payasam, (kheer made with coconut milk and tender coconut kernels), Parupu Pradhaman (both from God’s Own Country) and Badam Halwa. The soft and creamy Elaneer was a work of art and it took us a cup of nice & strong filter coffee to leave the dreaminess of the payasam behind.

The white one is Elaneer Payasam made of coconut milk and tender coconut kernels, the dark brown one in the background is another Kerala fave, Parupu Pradhman and the third is Badam Halwa

In the end, it was a meal which was not just about food, but a varied South Indian cultural experience. Having made a mental note of all the other lovely stuff I just didnt have the stomach left to try, I resolved to return soon.