The lovable restaurant brand SodaBottleOpenerWalla, with its witty and quirky decor, developed by the much-awarded restaurateur AD Singh as a tribute to the dying legacy of Parsi Irani cafes in Mumbai, made its warm debut in Hyderabad a little over a year ago. Despite the intial amused snorts over Berry Pulao on the menu, (not a patch on our Hyderabadi biryani, muttered the denizens), the Eggs Kejriwal, Dhansak, Chicken Farcha and Aloo Aunty ki cutlets soon took centrestage and SodaBottleOpenerWalla or SBOW took no time to find a place in all hearts Hyderabadi to be the next best place in town to meet and greet and eat with some nice retro numbers, (Kishore Kumar, anyone?) playing in the background and an energetic vibe all around the place, including its quirky notes on the blackboard for customers…No picking nose, no flirting and no wasting of food being some of the notable suggestions…

Says Mohit Balachandran, brand head and cuisine director of SodaBottleOpenerWalla, “While one explores the food traditions of Hyderabad, the Irani cafes, even with their diminishing realms are hard to miss. Each dish has a certain history, some told and untold tales attached to it. We are hoping to put the spotlight back on the erstwhile Hyderabadi Irani cafes like Cafe Iqbal, Garden Cafe (which is making way for the Hyderabad Metro Rail) and Madina (got gutted in a fire years ago) which used to be a hangout for intellectual and creative pursuits.”

Hosting a bloggers’ table to preview the new Hyderabadi notables, Shaaz Mehmood, partner at SBOW talked about how the idea of having a Hyderabadi Irani menu had been on his mind since long. “I am told that the highest number of Irani cafes in the world is here in Hyderabad. The least we can do is to revive a dying legacy by introducing some Irani menu favourites, like Osmania biscuits with Irani chai, haleem, biryani and lukhmis. The Hyderabadi recipes we have sourced are as authentic as they get of a vintage era, the way it used to be cooked in Hyderabadi households like ours. I did some researching on recipes with my grandmother, mother and even Shiraaz’s mother,” says Shaaz.

For starters, there were the crisp savouries Keema Lukhmis, more like square samosas, filled with minced mutton masala,  with green chutney, and needless to say they were devoured within seconds.

Tala Hua Gosht, a boneless perfectly-done mutton fry, made for an excellent second starter and there was also a vegetarian version of Tala Hua Arbi, which was again a big hit around the table, karaari or crisp and with that addictive chatpata masala on it! 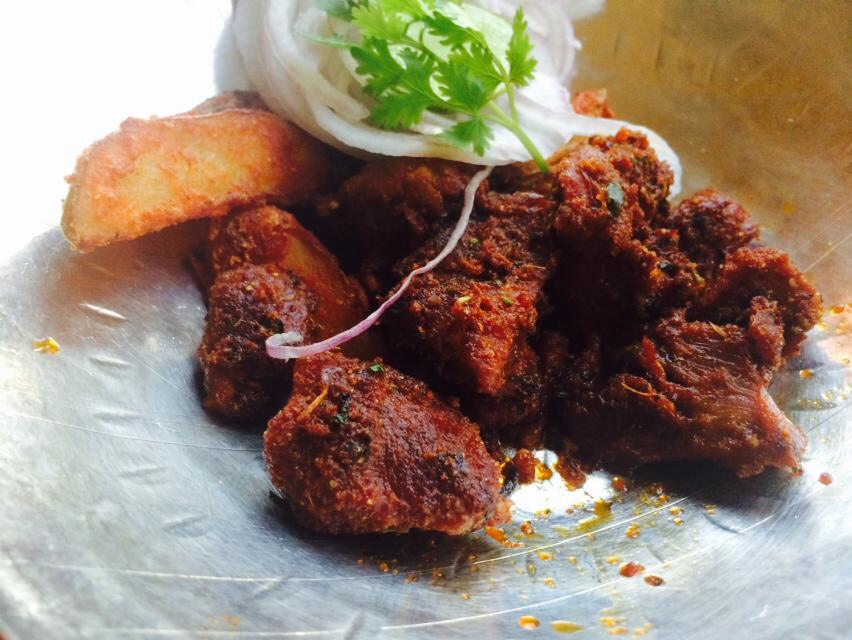 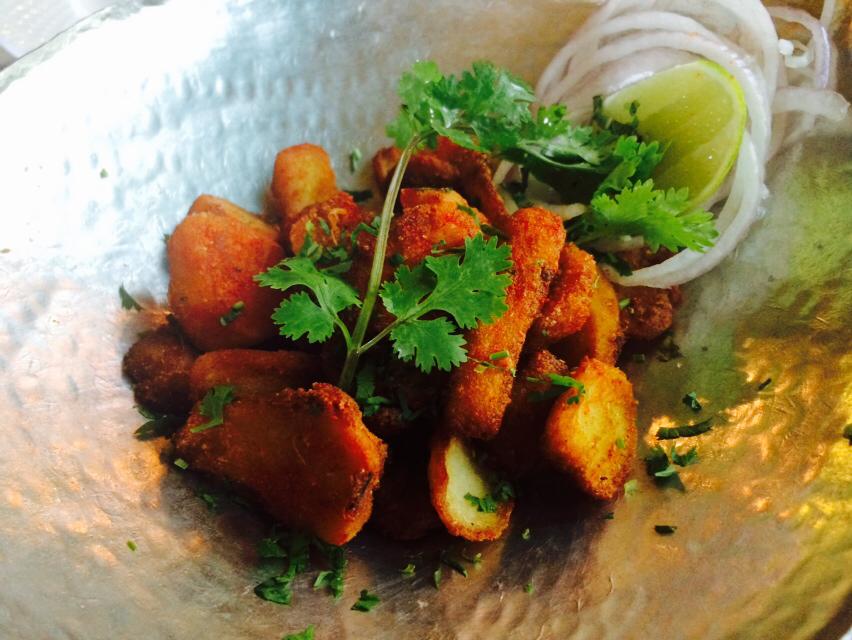 The robust and fiery red Paaya (tritters) Nihari was served next with Munshi Naan or Chaar Kona Naan, a typical square naan created by Mohammed Husain, who was Munshiji or accountant to the Nizam. Munshi Naan (seen in the marag pic below) and Sheermal are popular staples at Irani cafes in Hyderabad along with cookies like Osmania, Moon or Chand biscuits and Dilkhush puffs. I tried a spoonful of the Nihari but it was a tad spicy for me, preferring to finish instead the lighter Marag or mutton broth, wholesome, aromatic and warm, soul food at its best, especially had with Munshi or Dil Naan, (heart-shaped) naan. 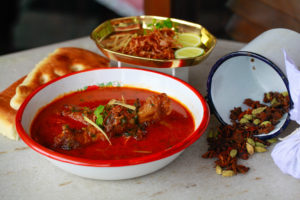 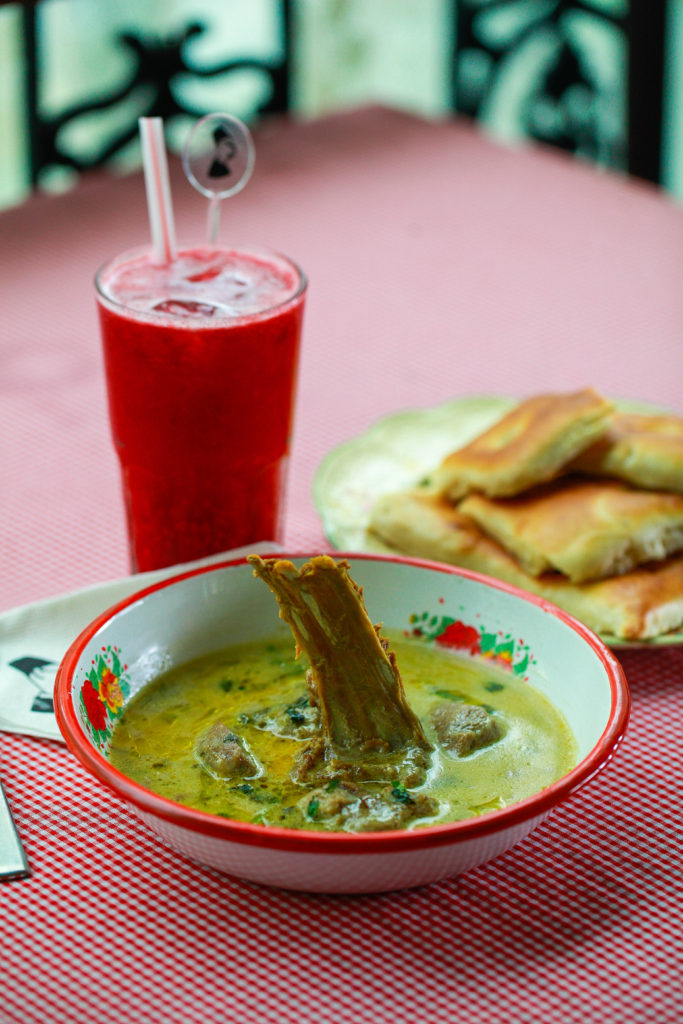 Marag (lamb shanks) broth with Munshi Naan, the square naan in the background

Hyderabadi staples Haleem & Biryani were next, and while both of them were true to the home-made as close to authentic as it gets, the haleem for me was superstar material. “This is exactly how we have it cooked at home, with wheat, mutton, lentils (moong, masoor, chana, tur) barley, and garam masala with pure ghee. The other good thing is it will be available round the year ,” says Shaaz.

Vegetarians need not despair as there are almost equal options on the menu, Kaddu ka dalcha, (delish!), Khatti Dal, Tala Hua Arbi, Veg Biryani (with Baghara Baingan) being some choices. 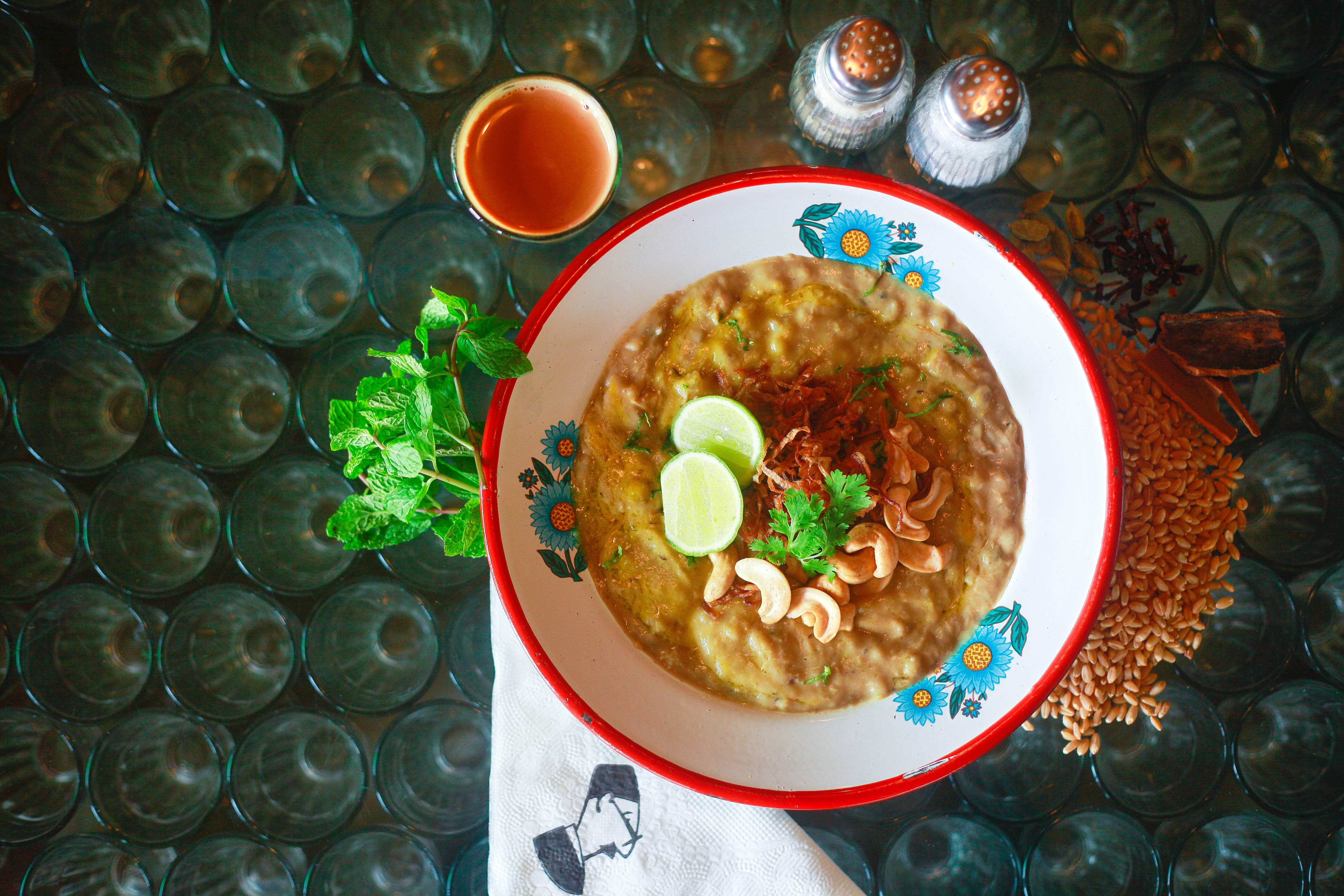 Haleem made the traditional way

Desserts time and there are both Khubani ka Meetha and Kulfi Falooda offered as options. I try a bit of both and am happier with the apricot stew or khubani ka meetha, served with a dollop of cream, with its unique tangy-sweet taste and slightly fibrous texture. 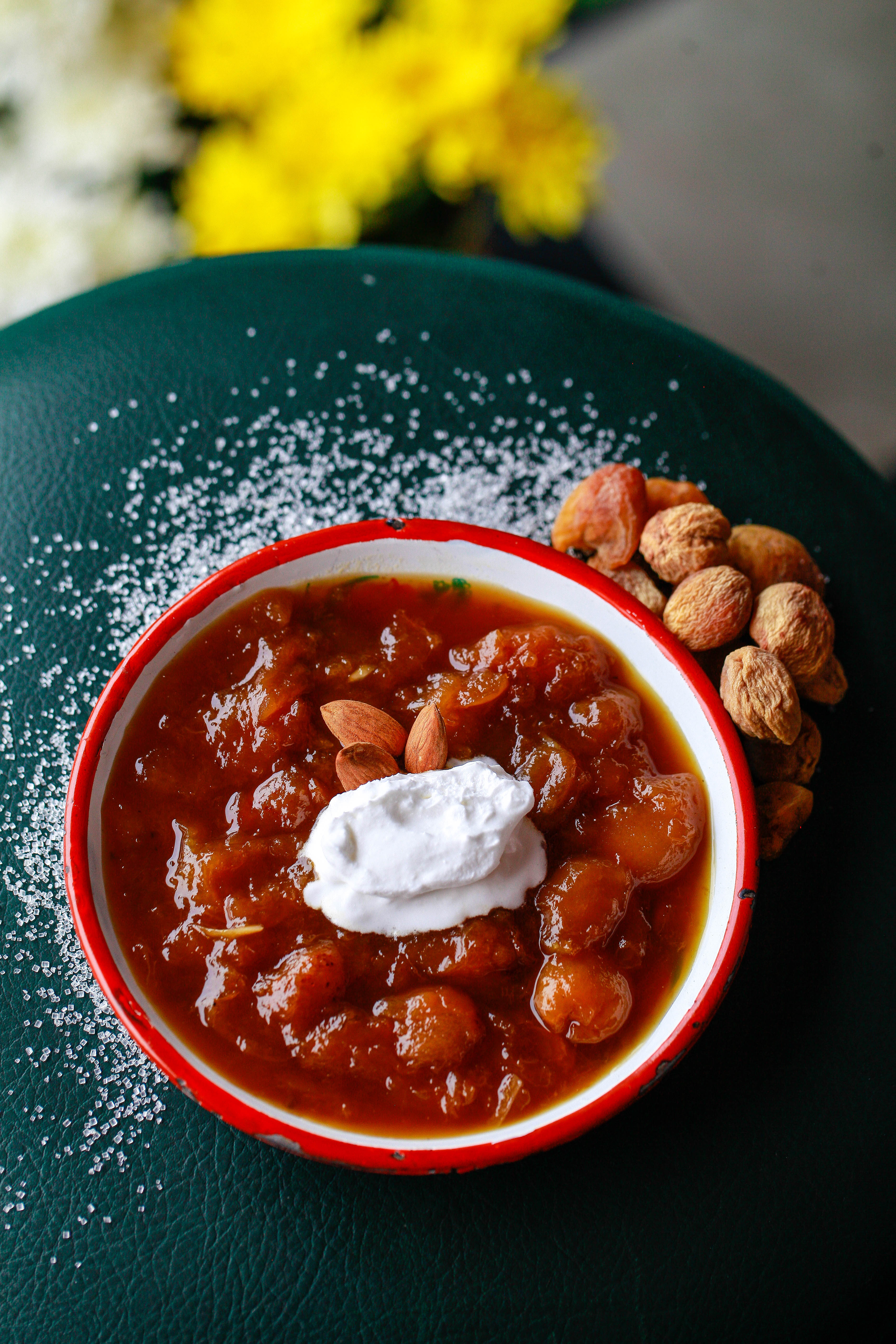 Khubani Ka Meetha with a dollop of fresh cream…aah!

This is one Parsi Irani-Muslim Irani liason which will spell a win all time for all those who love good food!