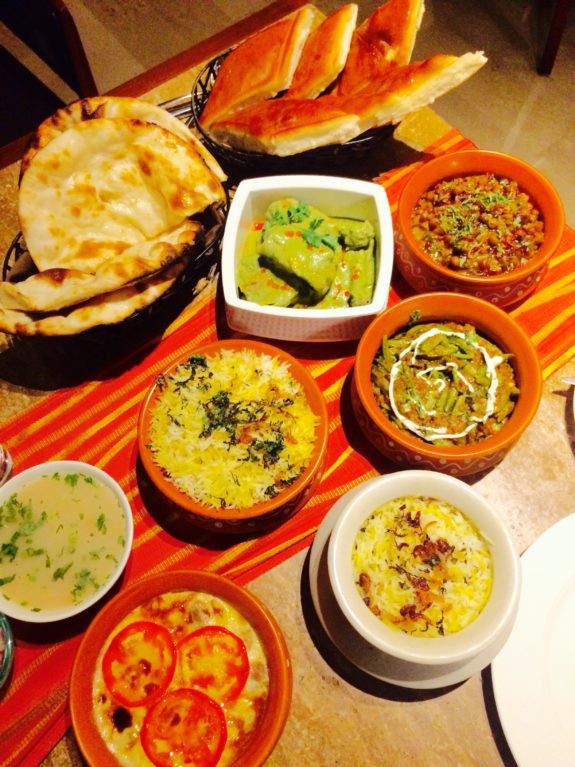 During my five-year stint as a journalist in Ahmedabad during the first few years of the new millennium, I had often heard about the Bohra Muslim community and its cuisine, especially the humungous-sized Bohra thaal served both at community events like weddings and at some homes. Ironically however, I had never had the opportunity of savouring the Bohri cuisine, in a city which was predominantly vegetarian, probably because I had no friends from the community, as the cuisine is still rare to come by, with perhaps a couple of restaurants now in Mumbai which serve Bohri food.

All that was destined to change, however when very recently  Westin Mindspace Hyderabad hosted a rather innovative food promotion called Reliving An Era curated by visiting sous chef Alafia from Westin Mumbai, and who to the luck of diners, also happened to be a Bohri Muslim.

What unfolded that evening at Kangan at the bloggers’ dinner was sheer magic. We began with soup, and while there was a Paaya option too, I preferred Doodh Nu Soup, which was soul food at its best, nourishing and fulfilling, a milk and vegetables (potato, carrot, cabbage etc) stock simmered to a lovely creamy consistency. Pssst, I tried a spoonful of the Paaya soup too from my neighbour but the Doodh soup was definitley more sublime. 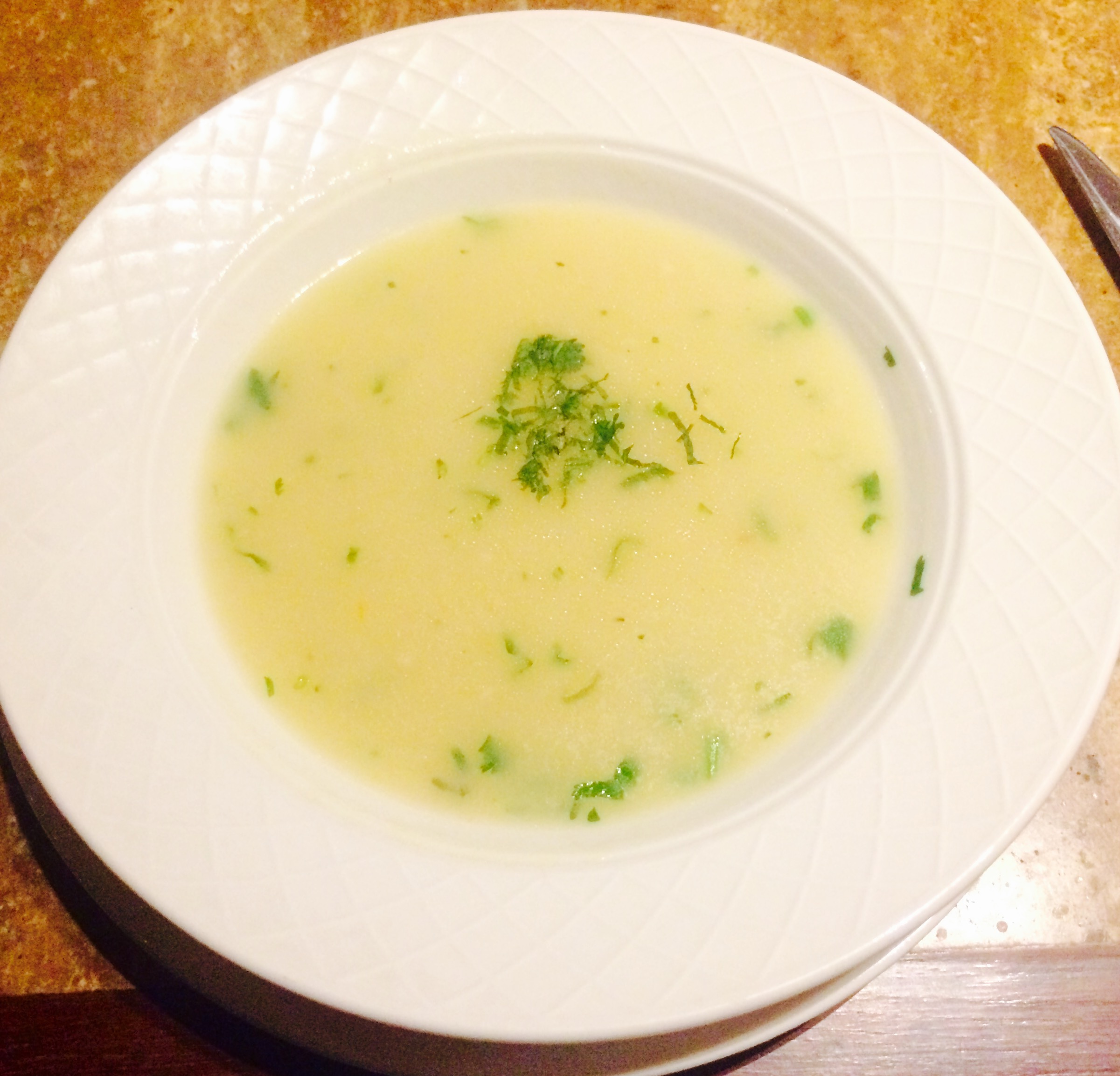 Time for starters, and there was literally a shower of appetisers, vegetarian and non vegetarian. We started with Kali Kebab, Lagan Ni Seekh (a bit like lasagna with minced mutton baked with an egg on top), Aloo Keema Patties (thin, crisp samosas filled with keema aloo) and I found the former to be the best, minced lamb ground with black peppercorns and deep fried as kebabs.

Aloo Keema Patties (samosa shaped) in the foreground, Lagan Ni Seekh on the left (bottom of the pic) and Kali Kebab on the right

But it were the vegetarian starters which stole the thunder, literally. The most noteworthy of them was the Nariyal Batata Patties, crisp patties made of a mixture of boiled potato-grated fresh coconut-green chillies-onion and a pinch of sugar and salt as seasonings. This was just so addictive! Equally good were the endearingly called Russian Patties, which were again potato cutlets filled with the ingredients of Russian salad (peas, carrots, pineapple and also a bit of mayo!), it had a nice fresh, flavourful taste to it. The Smoked Dal Samosa, which had the same kind of crisp thin samosas filled with boiled tur dal (smoked with a piece of charcoal) and garnished with seasonings, were also quite distinctive in taste. 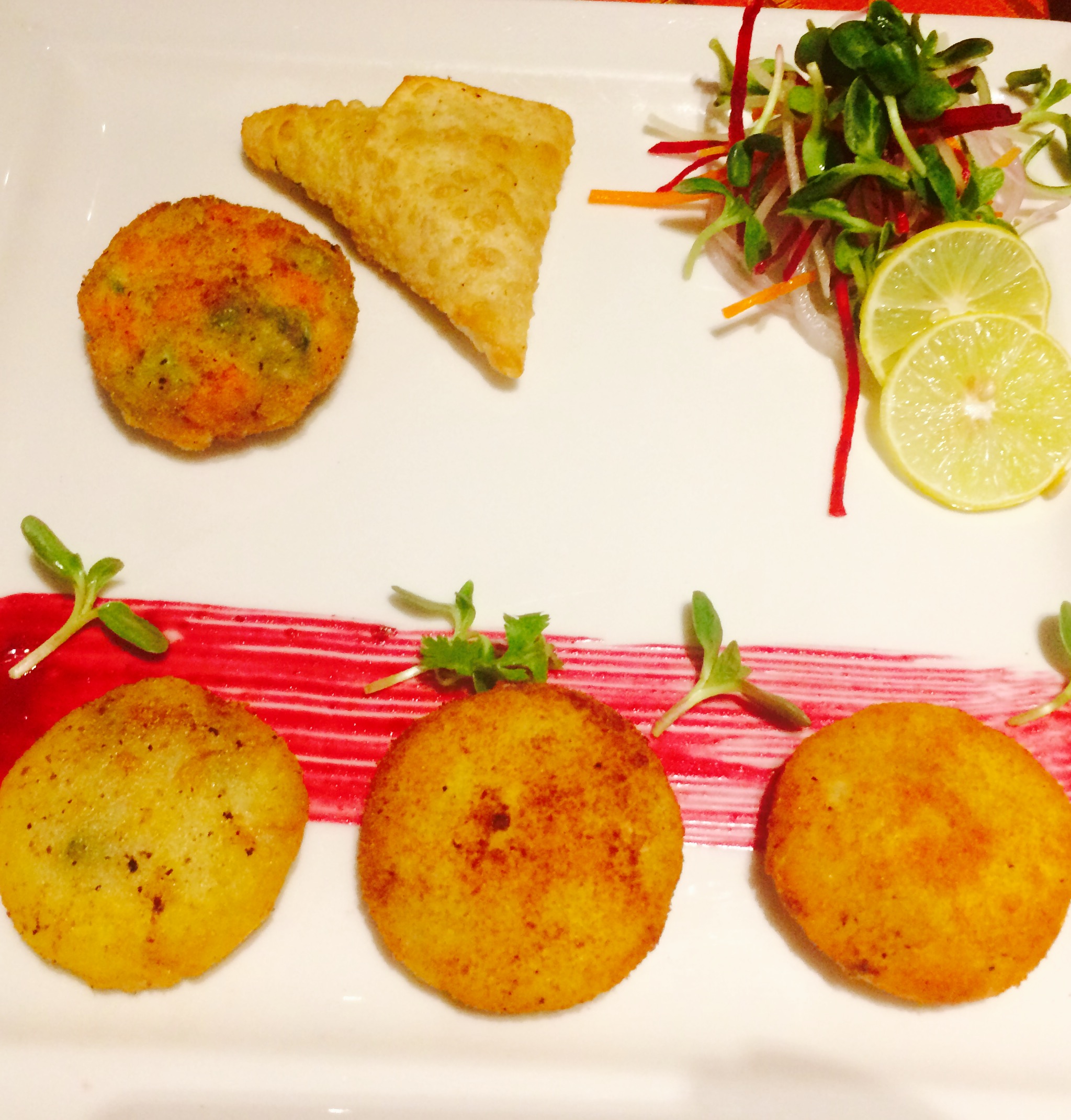 In background (top of pic) are the Russian patties, Smoked Dal Samosa and in the bottom of the pic are the scrumptious Nariyal Batata Patties

I was almost full by the time the starter courses were served and you may imagine why! However, one had to brace up for main courses and they were equally sumptuos!

There was Bohra Green Chicken (of which I dared to try a spoonful of the coriander-mint-green chillies curry only, only word, delicious!). Chicken Biryani (which I had to completely pass over) and last but not the least, the signature Bohri special Dabba Gosht, which is easily one of the most popular Bohri Muslim dishes and a taste of it reveals why, soft mutton chunks oven-baked with white sauce-macaroni-eggs topping and is had either with pav or rotis. The dish is fulfilling, subtle in flavours and just plain good! 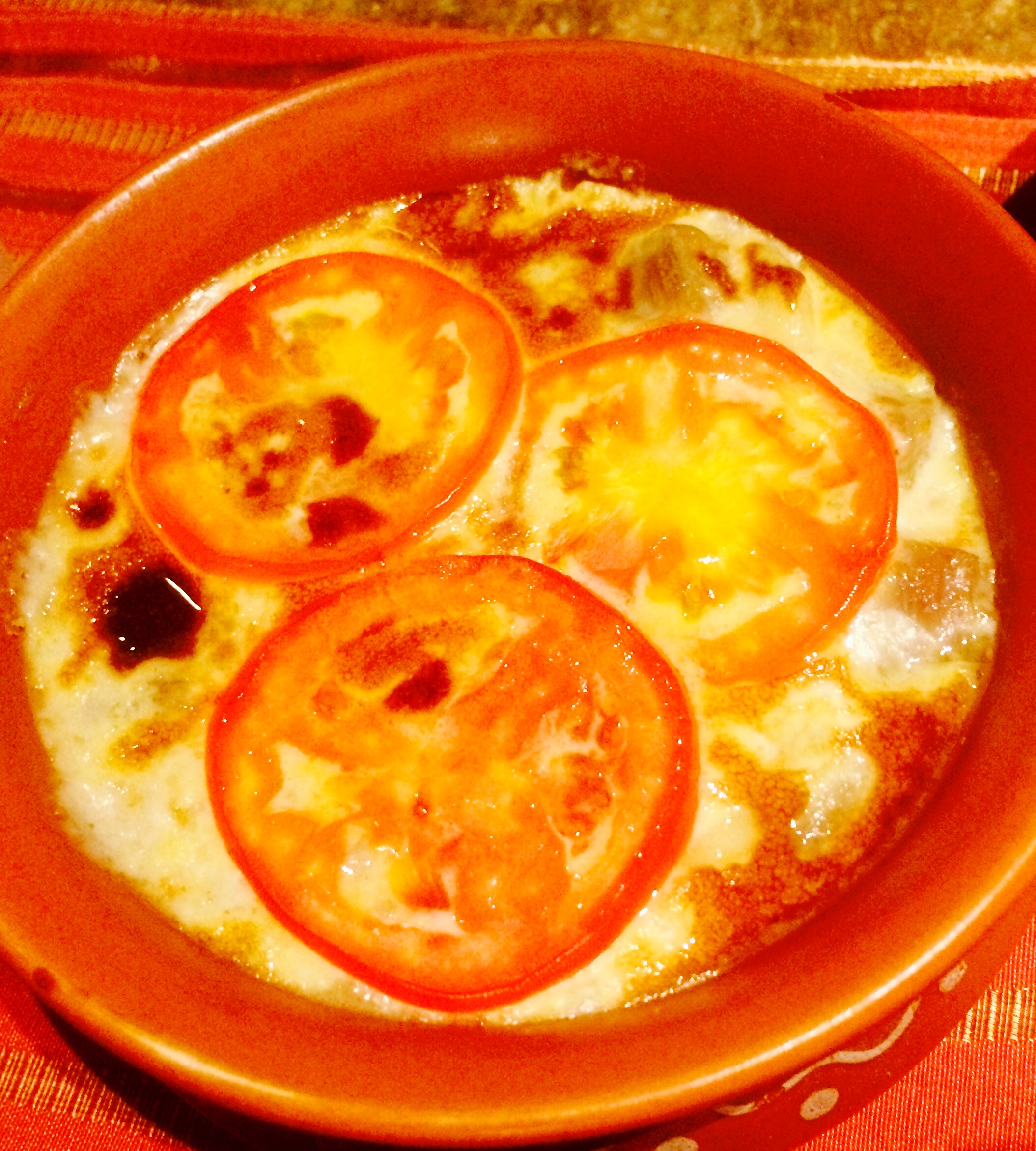 Thete are more vegetarian main courses: Gavarfalli Ni Sabzi, Masoor Pulav Sarkhi and Kala Chana Batata, of which the Gavarfalli turns out to be the surprise package. Who would imagine that the humble cluster beans, despised by most of us can turn out so delicious? “Its only the spices and the way you temper the vegetable, which makes all the difference, ” shares Chef Alafia. I also like the bite of Masoor Pulav Sarkhi I have a spoonful of, masoor dal pulav teamed with 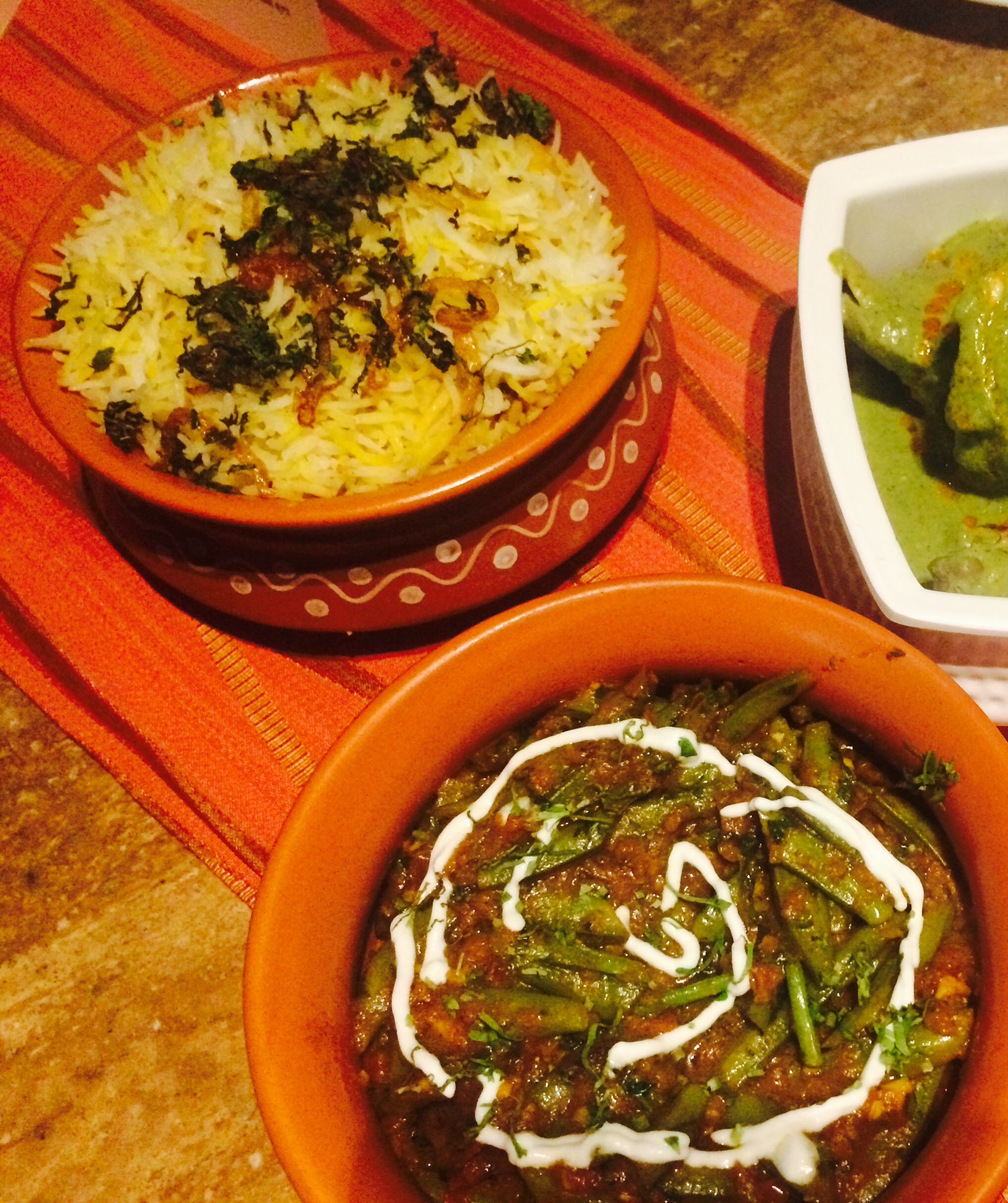 Masoor Pulav and Gavar falli sabzi (in the foreground) 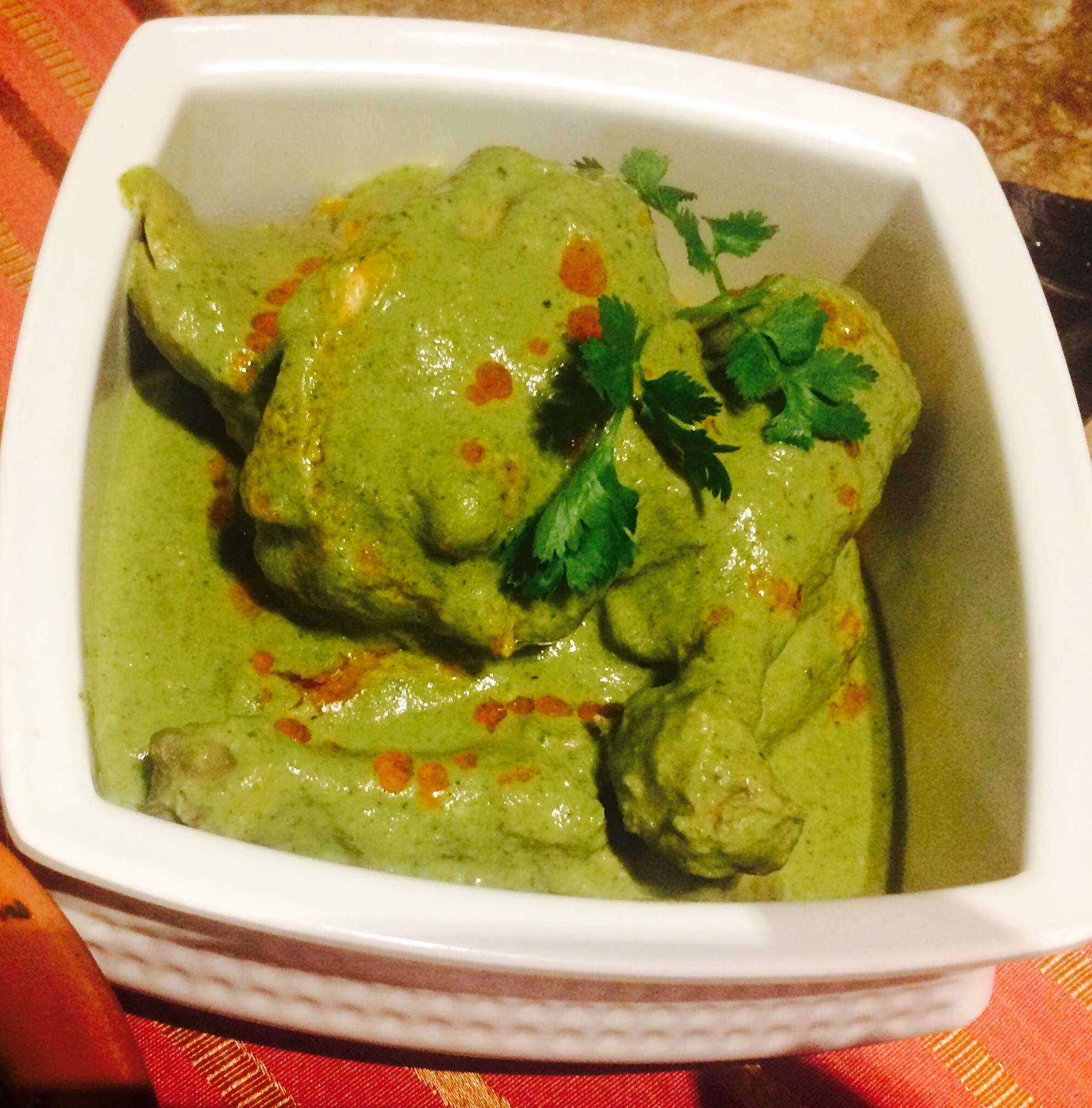 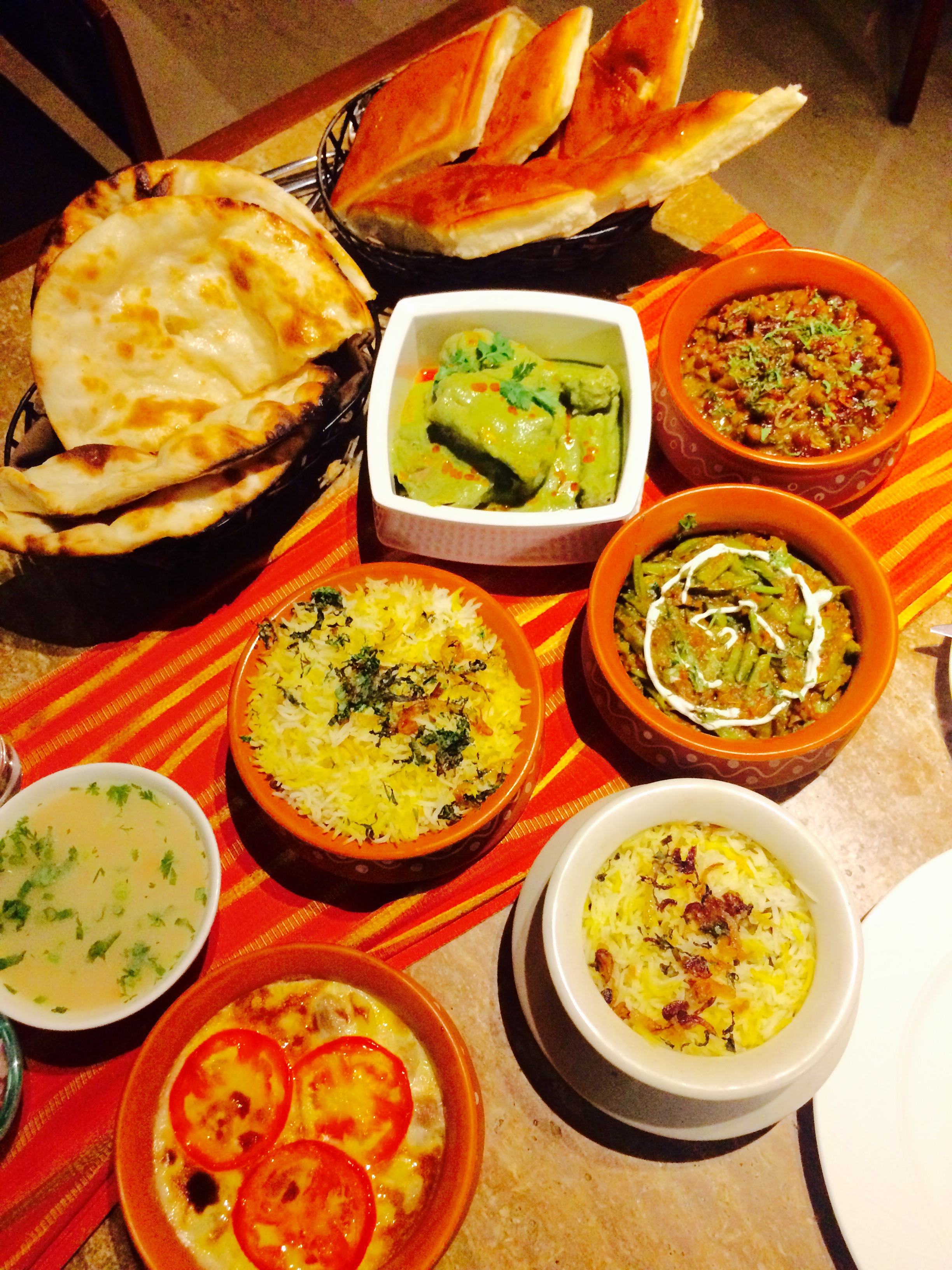 The Humungous Bohri Spread was delicious, distinctive on the palate and so wholesomely nourishing…

While we are more than done with our appetites, can we say no to desserts? Keeping with the largeness of the spread, there is a spread of sweetness too, Kalamro, Doodhi Falooda, Kheer Puri (hot crisp puris teamed with kheer which tastes like shrikhand) and Maleeda, a dry flaky dessert made of wheat flour, mawa, sugar, nuts and raisins, and a pinch of cardamom. Kalamro was the complete newbie for all of us and was, for a want of better words, a kind of sweetened curd rice, garnished with pomegranate seeds and was a

Ultimately, this superb meal was my primer of sorts to understand the Bohri cuisine which is multi-nuanced, healthy and just delicious! Chef Alafia also happens to be the best brand ambassador for promoting this rare cuisine!