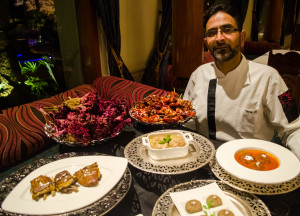 For the second time in about two weeks, I was invited to a Kashmiri food promotion in town. This time, it was Firdaus, the much-acclaimed Indian speciality restaurant of Taj Krishna, Hyderabad celebrating Wazwan cuisine or the food of the ‘Wazas’, descendants of the master chefs of Kashmiri aristocracy. Chef Tariq Waza, who works at Taj Vivanta Srinagar, and is well known for his expertise in home style Kashmiri and Wazwan cooking, with his family having a catering business too in Pampur, had been flown down to give the City of Nizams a taste of Heaven on Earth!
I was wondering what to make of this invite, especially in the context of a memorable Kashmiri meal which I had enjoyed a week ago, curated by Sanjay Kichlu, Delhi-based restaurateur & Kashmiri food consultant, at Aish, the Hyderabadi speciality restaurant of Park Hyderabad, where we savoured his delectable Kabargah (a dish more evolved and exotic than the popular delicacy Tabak Maaz) and Phirni which was just too good.
Good sense prevailed, however, and I found myself sitting at the preview table for bloggers set up at Firdaus. Soon enough, Chef Tariq joined us and and over some hearty conversation, we munched on some scrumptious starters sent over by him. The first one being the best, Tabak Maaz, yoghurt-simmered baby lamb rib fried crunchy and the lard glazing the chops just perfectly. 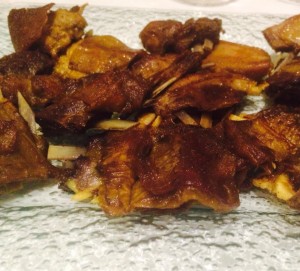 There was Chicken Kanti, boneless chicken fried crunchy with onion and tomato, it could almost pass on for a Chinese starter, chilli chicken, say! Vegetarian starter Nadru malai Tikki or pan-grilled lotus stem and cottage cheese cutlets didnt impress me, I much prefer lotus stem in its original crisp texture. I remembered especially the Nadru Kurkure, thin roundels of lotus stem fried crisp, at Aish.
For main courses, we moved on to a fiery red Rogan Josh, which was deliciousness personified, the gravy and the mutton cooked perfectly. I also loved the gravy of Rista, it was a robust flavorful gravy, not overspiced, gently reminiscent of the saffron, cardamom, nutmeg and all the lovely things added in the right measure. More than the gravy, Rista and its more-subtle cousin Gustaba (which has a lighter yoghurt-dry mint gravy) are known for their finely-minced and tightly-packed meatballs. Fresh lamb meat hammered to mince with a wooden log gives it its consistency, and no compromises on the freshness and the age of the lamb (preferably less than a year). 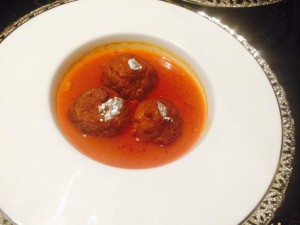 For vegetarians, there was the delightful dish of greens Haak, locally grown Kashmiri greens had been substitued with palak or spinach, but the tempering was intact with the Kashmiri red chilly, and a light ghee-redolent watery consistency. Yumm, and a glimpse of a very happy heaven!
There was also Rajma Gogje, and while the rajma was a bit bland for my taste, the addition of turnip or shalgam gave it a different bite and dimension. Nadir Yakhni, lotus stems simmered in a yoghurt gravy butfrankly, was not too taken in.
Since rotis are not usually served on a Wazwan platter, there was no sheermal (which I remembered savouring at Aish) but a saffron-hued and fragrant Kashmiri pulao, packed with nuts and raisins was served, and it did quite well.
For desserts, it was Badami phirnee, packed with powdered almonds and a bit nutty in texture and mercifully, less sweet! So was Kesari Halwa, sooji halwa which is a winter special in Kashmir, according to Chef Tariq.
Last, but not the least a sip of the golden-coloured Kashmiri beverage Kahwa, and life was as sorted as it can be.